A Father Passes On The Gift Of Flying 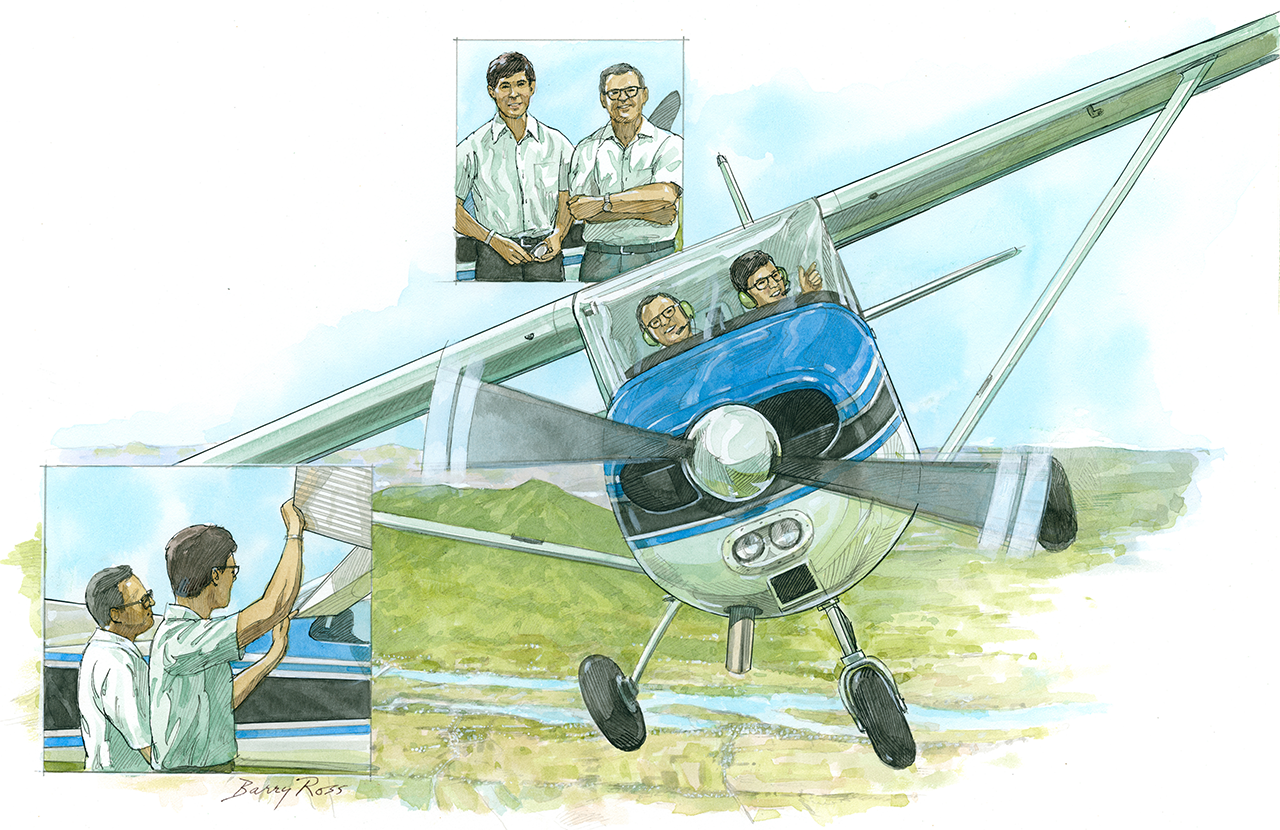 In July 1973, when I was 15 years old, my family moved from Bellevue, Nebraska, to Clark Air Base on Luzon Island in the Republic of the Philippines. This was our family’s seventh move in 12 years because of my father’s service in the U.S. Air Force. We lived in a comfortable house in Angeles City, the town adjacent to the airbase. Not far from our home, and just inside the base perimeter, was the Clark Aero Club—one of many popular Air Force recreational flying clubs providing service and family members a safe and less-costly way to learn to fly.

The Aero Club was a modest facility, consisting of two small buildings, a partially covered maintenance shed and concrete hardstands scattered in the grass for parking airplanes—mostly Cessna 150s and 172s. The “runway” was 2,000 feet of cleared land oriented slightly northeast to southwest. The very first time I watched the Aero Club airplanes flying over our home, I wanted to become a member and learn to fly.

But I needed my parents’ permission to begin flying lessons. My mother quickly dismissed my proposal, arguing it was too expensive. In point of fact, she simply did not want her young son in a small plane flying over the jungles of the Philippines.

I expected a similar rejection from my father—but for other reasons. By this time, my relationship with my father was strained. Perhaps because of his difficult early life, followed later by the unrelenting pressures of serving on Strategic Air Command bases during the Cold War, my father, a senior master sergeant, could be overbearing, distant and a strict disciplinarian. As the oldest child and only son in the family, I seemed to catch flak from him constantly. And this poor relationship, coupled with the disruption of the frequent moves during my early life, shook my self-confidence, and my school grades and general attitude suffered accordingly.

I don’t recall how I broached the subject with him—I only recall I was afraid to ask his consent. To my surprise, without any discussion, my father unhesitatingly signed the necessary paperwork. I didn’t think much about his response—I was just happy he gave me permission.

My father had an interesting background. He was one of 13 children from a working-class family in western Pennsylvania during the Great Depression. In 1936, his house was swept away in the Johnstown flood. After World War II began, he left home without finishing high school to work in a defense factory until he was drafted into the Army. He followed his two older brothers to Europe—Nick, a soldier in General Patton’s Third Army, and John, a B-24 waist gunner with the 446th Bomb Group. Dad went to Europe as an 18-year-old rifleman with the 60th Infantry Regiment. At war’s end, he was stationed at the Dachau concentration camp near Munich and later served as a guard at the Nuremberg war crimes trials. He returned home in 1947 and enlisted in the Air Force in 1950.

Shortly after joining the Air Force, my father learned to fly and logged flight time in some of the classic single-engine airplanes of that era. He also bought a Vultee BT-13 trainer for $400. However, before marrying my mother in 1956, he sold his prized possession and abruptly stopped flying—something I believe he missed terribly.

My first flying lesson was in September 1973. Afterward, I flew as often as possible while studying everything I could about flying—including the specific training and safety requirements for Aero Club student pilots mandated by Air Force regulations. I also experienced the unique flying environment in the Philippines.

Flying in the Philippines in 1973 was largely “unstructured.” Few airspace restrictions existed—apart from the immediate airspace around Clark (ICAO designation “RPMK”) and Cubi Point Naval Air Station (located about 40 miles southwest of Clark). Most of the “airports” I flew to were uncontrolled former WWII Army Air Corps grass or dirt strips—at Rosales, Plaridel and Lingayen. I quickly learned when flying to these airfields the importance of making a low approach before landing—useful for dispersing goats and carabao and assessing the general condition of the field.

Navigation aids on Luzon—VORs and NDBs—were sparse. Navigation was mostly by pilotage and dead reckoning. Radio communication oftentimes involved a patchwork of relayed messages from other airplanes or via Manila Control.

Luzon from the air was an impressive tapestry. The island was marked by broad, flat patches of rice and sugarcane fields, crisscrossed with irrigation ditches, dirt paths and a network of unimproved highways and bridges linking small towns and barrios. All of this was framed by miles of broad, white sandy beaches abutting the blue and green waters of the South China Sea. There were three mountain ranges, with some peaks over 9,000 feet high, covered with dense green foliage. Clark, situated on the Luzon plain, was bracketed by two stratovolcanoes—Mount Pinatubo, 14 miles west, and Mount Arayat, 12 miles directly east. When flying over Luzon, one learned to spot and avoid the rice fields in the event of a forced landing—landing in a rice field could flip the aircraft.

Because the tropical weather changed quickly and constantly, I preferred flying in the early morning—when cooler temperatures usually meant clear airspace and smoother flights. Thunderstorms were prevalent and unpredictable. During the return leg of my long solo cross-country flight to Laoag (on the northwest coast of Luzon), fast-moving thunderstorms developed in the South China Sea. These storms put me in a potentially dangerous situation as I flew south along the coastline, with the thunderstorms approaching rapidly offshore from the west and the Cordillera Central mountain range located off my left wing. Fortunately, I outran the storms and returned safely to Clark.

I soloed two days after my 16th birthday and took my private pilot check ride in July 1975. A few days after my check ride, my father suggested I take him flying. Early in the morning on the day of our flight, as I carefully pre-flighted our Cessna Skyhawk, he kept a watchful eye while asking me questions about items I was checking. Before we buckled into the airplane, he placed his 35mm camera on the wing of a nearby Piper Cherokee and ran back to stand next to me by our aircraft just as the camera snapped.

Our flight lasted one hour and 12 minutes. After proudly performing flight maneuvers I had learned, I turned the controls over to my father. He had a big grin on his face as we flew around Mount Arayat and Luzon before returning to Clark for five touch-and-goes. This would be the only time we flew together as pilots.

A week later, we left the Philippines and returned to the United States. I would go on to graduate from high school, college and law school in Nebraska and then serve on active duty as a Navy judge advocate. Following active duty, I worked as a civilian attorney in the Department of Defense. My father passed away in July 2007 after battling a long illness. I presided at his military funeral at Arlington National Cemetery.

“After proudly performing flight maneuvers I had learned, I turned the controls over to my father. He had a big grin on his face…this would be the only time we flew together as pilots.”

I never asked my father why he allowed me to learn to fly and paid over $1,000 for my lessons and flights—no small sum in the 1970s. Learning to fly as a teenager at Clark profoundly impacted my life and triggered a seismic shift in my attitude, maturity and self-confidence. After returning to the U.S., I suddenly saw my future as a young man with the same clarity, confidence and sense of purpose I experienced with every flight I made over Luzon.

I suspect my father knew of this all along because of his love for flying and his experience as a young man learning to fly. His gift to me in the Philippines was his unspoken confidence in my ability while affording me an opportunity, through flying, to help me see where I wanted to go in life and to figure out how I intended to get there.

In 2010, I returned to the Philippines and spent a day visiting the former U.S. airbase—now called the Clark Freeport Zone. The Air Force left Clark in 1991, after Mount Pinatubo erupted and extensively damaged the base. The site of the former Clark Aero Club was eventually developed into a successful aviation school using the original Aero Club buildings and runway. I rented a Cessna Skyhawk at the school and flew over Luzon for about an hour on a sunny morning. After landing in a stiff crosswind, I parked the airplane and looked to the hardstand where, nearly 35 years before, my father and I stood together before our flight. I thought of the photograph capturing that special moment—and I smiled. Somewhere, I believe, my father was smiling too.