Home How to Become a Pilot A Neglected 172 Turns Toxic 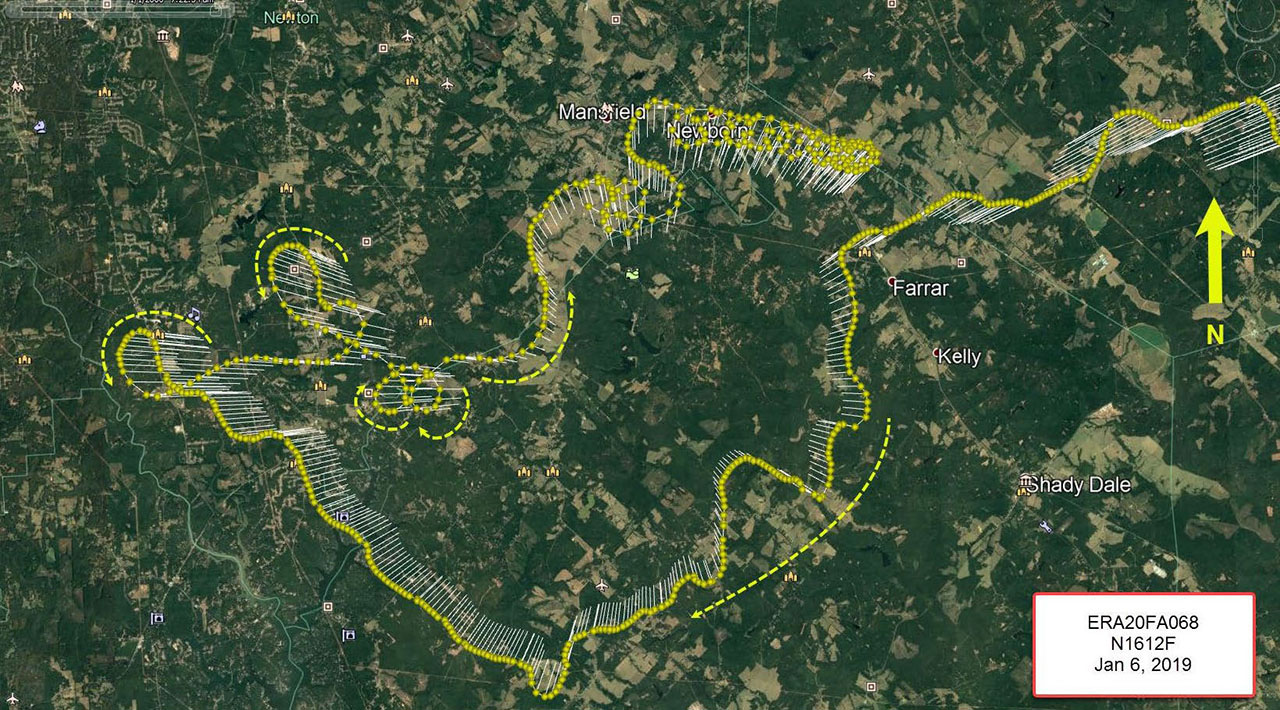 Alone in his Cessna 172, weather good, engine running well, the private pilot flew a mostly straight course for an hour. Then he began wandering, curving left and right, pitching up and down. He flew repeated tight circles, again and again, eventually crashing inverted into dense trees, dying on impact. It happened in January last year, and the National Transportation Safety Board (NTSB) has now released its final report.

It found that the cause of the accident was chemical poisoning. It’s a cautionary tale of maintenance missed.

The 1966 C172 H model, with a 145 hp Continental 0-300-D engine, took off from R. G. LeTourneau Field (KTOC), in Toccoa, Georgia, at about 12:30 in the afternoon. The weather was lovely—clear skies, light winds out of the west, 62 degrees Fahrenheit. The 72-year-old pilot was heading about 240 miles south, to the Cairo-Grady County Airport (70J) in Cairo, Georgia. His daughter told the NTSB he was likely flying to Cairo to look for property in the area. His brothers and cousins lived there, and he wanted to be near them. After an hour in cruise, not yet halfway, his flight took a strange turn. Or, rather, several strange turns.

The radar track shows 10 miles of multiple winding lefts and rights—“meandering,” the Safety Board calls it—then several left 360-degree turns. His groundspeed was fairly constant, around 70 to 80 knots. This was followed by right 270-degree turns and some more snake-like wanderings. Then 13 consecutive tight right 360-degree turns at low altitude. Groundspeed was now oscillating between 60 and 130 knots. One eyewitness told the country sheriff, “I saw a small plane circling the lake…all of a sudden it seemed to take a sharp turn and began settling quickly and fell past the tree line. I heard the impact crash and about two minutes later saw smoke.”

Other than impact and fire damage, the plane was found complete with no apparent defects. Fuel caps in place, flaps up, flight control cables connected. The “what happened?” part seemed easy. The Skyhawk departed controlled flight at low altitude following aggressive steep turns. But why did it happen? Why did he lose control? Why was this pilot maneuvering over the small town of Newborn, Georgia?

After the accident, an answer seemed elusive. The pilot had over 350 hours of flying experience, earning his private pilot certificate in 2007. He was flying his familiar personal 172, heading on a purposeful cross-country, reportedly in fine spirits and good mental state. The weather was benign, the plane had fuel, and the pilot made no radio transmissions indicating a problem.

The pilot didn’t have a current FAA medical, nor had he completed a BasicMed course. His last FAA medical exam was back in 2013. The NTSB obtained medical records from his primary care doctor, showing in 2019 he had “known coronary artery disease, paroxysmal atrial fibrillation, a previous stroke, high blood pressure, arthritis, and carotid artery disease.” At that time, he was taking eight different daily medications. The FAA’s Forensic Science Laboratory found many in his blood, including bupropion (an antidepressant), citalopram (another antidepressant), diphenhydramine (an antihistamine), diltiazem (a blood pressure medication), atorvastatin (a cholesterol-lowering drug) and sildenafil. But there was also another chemical no doctor had prescribed.

The Georgia Bureau of Investigation Forensic Sciences division identified 61% carboxyhemoglobin (COHb) in the pilot’s blood. The sample tested by the FAA Bioaeronautical Sciences Research Branch had 43% COHb. Nonsmokers typically have COHb levels below 3%, while smokers may have levels of 10%. High levels of carboxyhemoglobin disrupt the normal oxygen transport process in the human body. It causes functional anemia. Elevated COHb levels may cause vague symptoms like headache, fatigue, dizziness and nausea. Levels above 40% may lead to confusion, blurred vision, marked drowsiness, seizures, loss of consciousness and death.

Carboxyhemoglobin is formed in the bloodstream when carbon monoxide (CO) gas binds to hemoglobin (Hb). Carbon monoxide gas is one of the byproducts of incomplete hydrocarbon combustion. It’s in engine exhaust gases.

The engine had remained mostly intact, except for some thermal damage near the firewall. Forensic teardown of the powerplant itself “did not reveal any pre-impact anomalies that would preclude normal operation.” The mufflers, and their shrouds, had separated during the crash and were found partially buried in mud. That protected them from the post-accident fire and allowed for detailed examination by the NTSB Materials Laboratory. The left muffler had been replaced in 2010 and appeared mechanically sound. However, the right main muffler was older, and the tube shell had holes and cracks caused by metal wastage. These would allow exhaust gases to enter the cabin hot air ducting, exposing the pilot to carbon monoxide gas.

Exhaust systems are checked as part of an airplane’s annual inspection. They function in a hot, highly corrosive environment, and cracks or leaks can cause significant amounts of damage under the cowling. The accident airplane’s most recent annual inspection was in September 2018. It was conducted in its T-hangar, not in a maintenance shop. The Skyhawk’s maintenance logbook only showed three other entries in the 10 years before the accident.

A mechanic who worked on the Skyhawk in 2013 told the NTSB it was airworthy then but had fallen into “bad shape,” and he felt it was no longer airworthy. The mechanic said the owner/pilot “had a somewhat cavalier attitude towards the rules” and “tried to do the minimal amount of work on the airplane that he could get away with.” When the owner recently asked him to fix a problem with the electrical system, the mechanic declined, saying he’d only put his name in the logbook if allowed to do a full annual inspection. The owner reportedly found someone else who was less expensive.

Carbon monoxide gas is colorless, odorless, tasteless and nonirritating. You can’t tell it’s leaking into the cockpit until you start to feel bad. And it’s easy to attribute feeling bad to fatigue, hypoxia or a lousy breakfast. A short flight might not produce enough CO gas to impair you noticeably, but after an hour on a chilly January day with the cabin heat on, all of us would be severely impacted.

In 1997, a family physician flying his Piper Comanche fell asleep at the controls due to CO poisoning from a cracked right muffler. After 250 straight-line miles on autopilot, the selected tank ran dry, and the plane glided to a soft wings-level crash landing in a hayfield. The fresh air that resulted allowed the pilot to wake from what would have been a permanent nap. As his confusion cleared, he staggered to a farmhouse for help. He was lucky to be alive.

We can only speculate on the condition of the Skyhawk pilot—dizzy, confused and then maybe worse. We don’t know if he was conscious when he crashed.

Because of post-accident fire damage, the NTSB could not determine if the airplane was equipped with a cockpit carbon monoxide detector. One popular online pilot shop I checked sells several types. The cheapest one is $4.95.