Home How to Become a Pilot Aileron Cable Broke On Takeoff? Pilot Rolled To A Survivable Crash Landing

Last week a two-seat Lancair 360 kitplane crashed on takeoff from Edmonton, Alberta, Canada’s Edmonton/Josephburg Aerodrome (CFB6) after, the pilot says, an aileron cable failed. The two occupants, the pilot and a passenger, survived with unspecified injuries. That they survived is astonishing. This is what happened, again, according to the pilot—Canadian investigators are still at work looking into the crash.

The plane, a side-by-side high-performance all-composite kitplane, was taking off when the pilot reported that the plane banked hard right, the result of a broken cable. When he couldn’t get any control response, the pilot wrote in an online post, pitched up, kept the plane rolling to the right and crash-landed belly down. This, he said, saved their lives. That last part is undeniable. 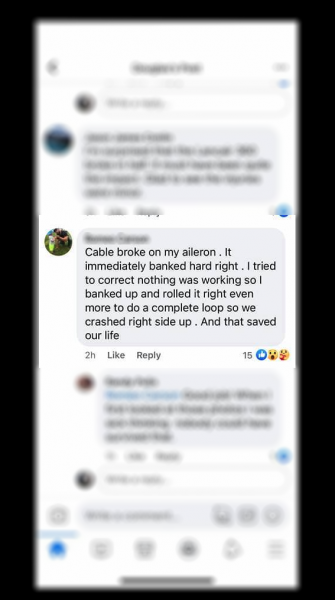 In its standard configuration, however, the Lancair 360 has push-rod and not cable- actuated aileron controls. Moreover, others have noted that the prop and its hub appear to be missing in this photo. Whether that happened post crash or was a factor, again, is not known.

Whether it was a broken cable or other control malfunction, the aerodynamics of the explanation make perfect sense. And even more, the bottom line is that both occupants walked away. No matter the details, that’s the thing that really matters.