An-225 as Good as Gone: Smoking Gun Photo of Behemoth Plane Destroyed by Fire

A journalist has gotten his hands upon a photo that shows the damage to the Antonov An-225 Mriya transport, formerly the largest plane in the world by most metrics. The photo shows the entire forward fuselage severely damaged or destroyed, the undercarriage collapsed and disappeared under the weight of the titan and the upper mid-section of the fuselage, where the wings connect to it, left a scorched and melted blob. The rear fuselage appears to be somewhat intact, as do the outer portions of the wings. The tail cannot be seen in the image, but it might be largely intact.

The photo was shared in a tweet by Dmitri Alperovitch, a Russia-born American computer security expert, and news analyst and commentator. Alperovitch warned of a Russian invasion of Ukraine months ago.

Is the plane repairable? Yes. But such a question is a complicated one. As Russia sweeps through Ukraine, facing isolated and diminishing pockets of resistance, what are the prospects of a free Ukraine where such a thing could happen? And even if it could, the process would surely take years and perhaps a billion dollars and at a time when much of the country’s critical infrastructure has been destroyed by invading Russian troops and airstrikes, and when humanitarian need will doubtless be great for years, if not decades, to come. 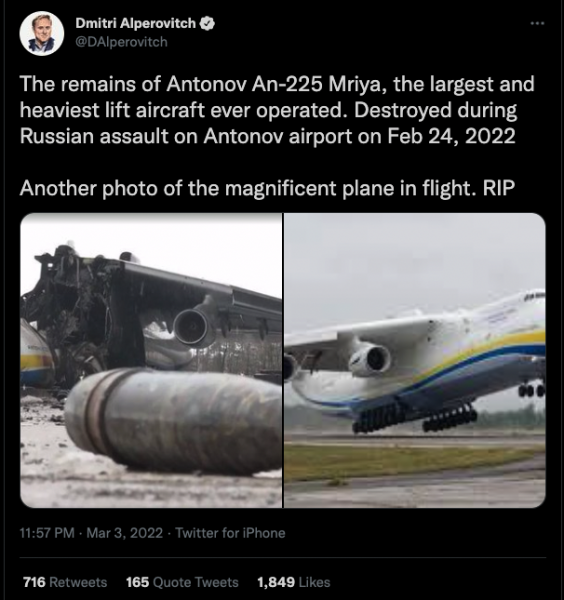