And Then This Happened: Real Aviation Records

Home How to Become a Pilot And Then This Happened: Real Aviation Records

Many people believe that cherished aviation records are chiseled in stone, but we ask, “What kind of stone? And who did the chiseling?”

It’s true that some aviation records, like Charles Lindbergh’s 1927 solo flight across the pond, would’ve been impossible to fake, and no one doubts Lucky Lindy’s place in history. But other records, especially those of very early flying achievements, are problematic. Given the length of time that has passed and the disappearance of documentation for many early claims, some early milestones are hard to prove conclusively. And back in the days before GPS and digital air data computers, our information collection technologies were primitive, at best. In many cases the data supporting many claims was approximate at best.

Then there’s the issue of definition. Why aren’t hot air balloons widely recognized as the first to fly? Some early ones were even powered. Why does the first powered flight have to be of an airplane and not a helicopter? And some of the lines are pretty subjective. What makes for “controlled” flight? How long does a plane have to remain in the air, in terms of both time and distance, for its flight to count? And how much credibility should we give to the people whose word we sometimes need to take in order to verify claims?

None of the answers to these questions are easy, or perhaps even possible, to arrive at. And with this in mind, here are a number of aviation records that might, at the very least, deserve a big fat asterisk. 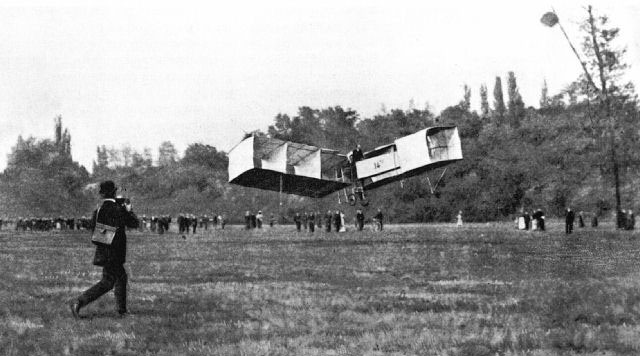 First Powered Heavier-Than-Air Plane To Take Off On Its Own Gear In No-Wind Conditions: Probably Alberto Santos-Dumont’s bizarre-looking 14-bis, which wasn’t a particularly advanced design but could take off all by itself. It was also the first plane to be filmed in flight.

Dumont’s odd- looking 14-bis. Was it actually the first plane to fly?