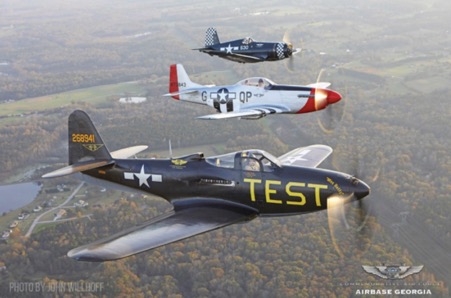 The Commemorative Air Force Wing located in Georgia has just been upgraded to “Airbase” status as CAF Airbase Georgia, effective today. Headquartered at Atlanta Regional Airport-Falcon Field (KFCC) in Peach Tree City, now-Airbase Georgia is among the busiest CAF units, with seven flying World War II aircraft and one restoration underway. “We are excited and proud to be honored with an Airbase designation,” said Airbase leader Jim Buckley, “with over 350 members, multiple award-winning aircraft restorations, a maintenance and machine shop, continuous growth, and financial stability.”

To qualify for Airbase status, besides hosting flying aircraft, a CAF unit must have a population of at least 500,000 within a 100-mile radius, be located on an airport, contain interactive and interpretive displays, incorporate a restorations shop, and host public events, such as an annual fly-in. ”Each Airbase serves as part of the business community and is a publicly recognized attraction/destination and education distributor,” according to CAF guidelines.

Founded in 1987, CAF Georgia Airbase cites its mission as inspiring and educating the next generation of aviation professionals. “In late 2019,” said Buckley, “we began working with local schools and aerospace employers to help solve the pilot and aviation mechanic shortage and also help teach World War II history at all grade levels. We also partnered with the tourism sector and a foundation has been established to assist in future fundraising efforts.”

Though its museum is currently shuttered due to the pandemic, CAF Airbase Georgia expects to resume offering Warbird rides in March. Available for 20-minute rides are the North American P-51 Mustang, Douglas SBD-5 Dauntless, North American AT-6 Texan, and Beech T-34 Mentor.