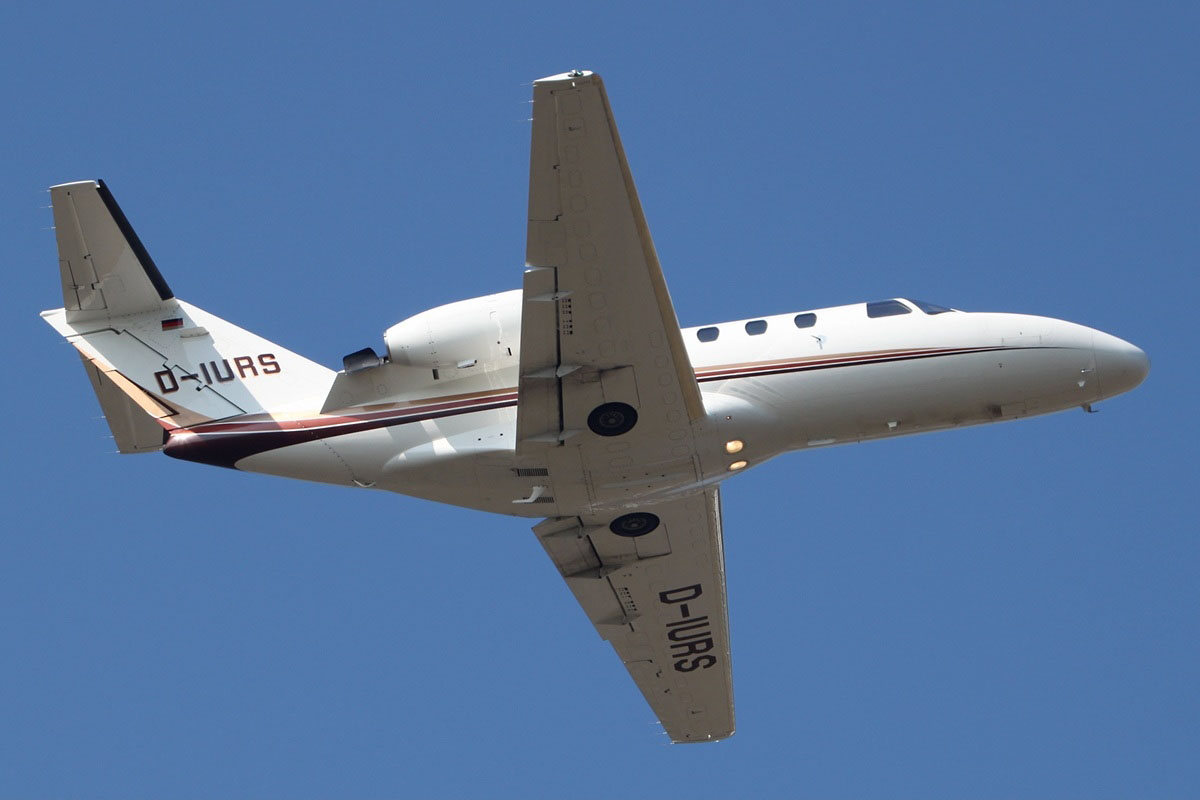 A 51-year-old pilot flying alone in his personal Citation jet lost control of the single-pilot jet shortly after takeoff, crashed and was killed upon impact. The National Transportation Safety Board (NTSB) determined the probable cause of this April 2018 accident was “loss of control while operating in night instrument meteorological conditions as a result of spatial disorientation.” It’s an all-too-common NTSB statement of probable cause, typically seen when a visual flight rules (VFR) pilot pushes into bad weather. But this was an experienced instrument pilot in a well-equipped aircraft. So, what happened?

The pilot claimed 1,900 hours total time on his last medical, but a logbook recovered from the wreckage shows 737 hours, with 13 hours in the previous 30 days. He had FAA ratings for single and multiengine land, instrument airplane and a Cessna CE-525S type rating. The S part of the type-rating allowed him to fly the small-business jet single-pilot.

The 1996 Cessna 525 CitationJet had 3,311 hours at its last maintenance inspection. It’s a safe, modern capable twin-jet. This one had a large multifunction display and a Garmin MX20, which displayed satellite weather information and color-coded terrain. It was a smart-looking jet, painted with flowing green ribbons over a white base. Sometimes the pilot flew it alone, but mostly he flew with his father or brother, both of whom also had CE-525S type ratings. They usually flew on an instrument flight rules (IFR) flight plan, taking turns to swap left- and right-seat duties. The three of them worked together at the family’s lumber company. They based the plane close to home at the Shenandoah Valley Regional Airport (KSHD), Virginia, where they also had a Beech Baron.

On Saturday, the accident pilot flew the Citation solo from KSHD to the Chesterfield County Airport (KFCI), 82 miles to the southeast. He was in position to perform a flight review Sunday morning and to spend time with his girlfriend. She said the review on Sunday was “satisfactory on everything,” though there are no details about it in the NTSB docket. He returned to her house around noon, then went to the grocery store and watched some baseball on television. The plan was he would fly home on Monday.

The pilot’s girlfriend told the NTSB he had “a couple of drinks when they were fixing dinner.” While she was looking at baseball information on his phone, a text came in of a “personal and explicit nature.” It upset her. Although they “kept everything on the down-low,” she had believed they were in a committed relationship. She asked him to leave, and he left in an Uber around 7:30 p.m.

According to the Safety Board, she thought he was going to a hotel. That would have worked out fine. But instead, he went to KFCI. While it’s admittedly speculative, the Citation was his ride home and his regular, familiar and reliable means of transportation. It might have represented an attractive means of escape from the drama and, even, a kind of therapy for him.

The Uber dropped him off at the single-runway nontowered airport at 8:02 p.m., 10 minutes past sunset. Security camera footage at KFCI shows him walking straight out to the plane. An FBO line service employee went out and asked if he needed any fuel. The pilot said no, he was good. The line service agent didn’t notice anything out of the ordinary during the quick interaction, telling the NTSB that he saw, “nothing about the pilot that made him think he shouldn’t be flying this jet.” Engines started at 8:17 p.m., the Citation turned around on the ramp and stayed there for a bit.

Now the late-shift employee began to notice some odd behavior. The pilot never transmitted on the CTAF. Instead, he taxied around on the ramp some more, then to the departure end of runway 15. Inexplicably, he then taxied back. Was this an inflection point? Maybe only after starting the engines did he remember the couple glasses of wine. Maybe only after starting the engines did he realize there was weather to the west. This flight wasn’t planned for that evening, nor was the relationship stress expected.

KFCI was VFR, with broken cloud layers at 3,200 and 4,000 feet, good visibility underneath, wind from 140 degrees at 12 knots.  However, on his route to the west, a solid line of powerful storms was raging. The pilot had Foreflight on an iPad in the cockpit. Plus, the plane had a satellite weather display, but we don’t know what he looked at before takeoff. We do know he didn’t call anyone for a briefing.

FAA Flight Services was well aware of the weather. Along the route were tornado warnings and urgent pilot reports from CRJ-200 and Boeing 737 aircraft calling moderate turbulence above overcast ceilings of 1,500 feet in heavy rain and lightning. SIGMET 36E was active, warning of severe thunderstorms with tops to flight level 420 with tornadoes, 1-inch hail and wind gusts to 60 knots possible. The pilot didn’t file a VFR or IFR flight plan or talk once to air traffic control.

Perhaps ignorant of all of this, the pilot taxied the CJ once again, this time to the departure end of Runway 33. The plane took off at 8:33 p.m., still in radio silence, with about a 12-knot tailwind. Radar tracking showed a pretty consistent northwest heading. Mode C reported an initial climb to 11,500 feet, almost certainly in the clouds without the pilot having requested or received an IFR clearance. Shortly thereafter, the aircraft descended rapidly about 4,300 feet. This is below the minimum IFR safe altitude of 5,700 feet around the KSHD airport. According to the NTSB report, the weather then got bad. He flew alone directly into and through the line of intense thunderstorms. After nine minutes of straight and level flight, at 8:54 p.m., there was a left turn and sudden descent, more than 6,000 feet per minute down.

The pilot’s girlfriend told the NTSB he had ‘a couple of drinks when they were fixing dinner.’ While she was looking at baseball information on his phone, a text came in of a ‘personal and explicit nature.’ It upset her.

The only witness had just finished putting his kids to sleep and was himself getting into bed. He told the NTSB he heard the “screaming of the engines” and saw lights flash overhead. Then he heard, indeed, felt the airplane impact the ground, followed by a bright fireball. He remembers the clouds were really low, and “there was a ton of rain.” The jet had crashed into nearby woods, all components found together, highly fragmented, in a compact accident site. The Board reports, “the damage to the airplane and the distribution of the wreckage were consistent with a loss of control and a high-velocity impact.”

The closest official weather station, 13 miles away at the Charlottesville-Albemarle Airport (KCHO), had visibility of 2.5 miles, broken ceiling at 700 feet, overcast at 1,500 feet, temperature and dewpoint 11 degrees Celsius, lightning detected to the northeast and south. Other nearby airports were all recording solid IFR conditions with rain and lightning. Local TV news reported several houses in the area damaged by the storm and thousands more houses with no power.

After the accident, investigators found no pre-impact abnormalities with what was left of the aircraft. An official answer to why and how an IFR pilot in his well-equipped jet would take off without a clearance and lose control was likely provided by toxicology testing. The FAA’s Forensic Sciences Laboratory found ethanol at a concentration of 0.08 gm/dl in the pilot’s muscle tissues—twice the FAA alcohol limit of 0.04 gm/dl. (The federal limit to legally drive in the United States is a blood alcohol content of 0.08%.) Also, the medical drug cetirizine was present. Cetirizine is an over-the-counter antihistamine medication used to relieve allergy symptoms. It comes with the warning “avoid alcoholic drinks…be careful when driving a motor vehicle or operating machinery.”

The NTSB final report lays it out clearly: “the pilot’s intoxication, combined with the impairing effects of cetirizine, affected his judgment; contributed to his unsafe decision-making; and increased his susceptibility to spatial disorientation, which resulted in the loss of control of the airplane.”

Looking back, it’s sometimes simple to see when an accident could have been prevented. But when unexpected emotional events unfold, it’s not so easy in the moment to look forward. And it can be harder still to change trajectories. Unfortunately, under the influence of alcohol, this pilot chose flight.

Risking A Career (Or More) On A Drink

Tags: After the Accident