Home How to Become a Pilot Connect the Dots

An American Airlines route map from 1954.

The COVID panic has reduced air travel to almost nothing. U.S. carriers have grounded up to 90 percent of their flights. Survival comes down to perseverance, bailout money, and innovation.

As to the latter, Alaska Airlines has a strategy to help it remain in markets where ridership has plummeted. Instead of relying on nonstop “spoke” flights from its Seattle hub, the airline will run consolidated, connect-the-dots style flights that take in multiple cities in a single run. For example, rather than operating one flight from Seattle to Pittsburgh, and another from Seattle to Baltimore, there’s now a single aircraft going Seattle-Pittsburgh-Baltimore. Seattle-Dallas-Houston and Seattle-Minneapolis-Columbus are two others.

It’s a useful way of adapting to the current environment. What it’s not, however, is new. Back in the proverbial day, this is what most cross-country flying looked like. Flights going coast-to-coast would often make two, three, possibly four stops along the way. I have a collection of timetables from the 60s and 70s; even then, well into the jet age, multiple-stop itineraries were common. A Boston to Miami flight with Eastern, for instance, might have stopped in Philadelphia and Atlanta. In PHL or ATL, passengers destined for those cities would disembark while additional Miami-bound passengers came aboard. “Through” passengers, as they were called, remained in their seats. The same thing was common in long-haul markets overseas. A flight from London to Singapore might have gone via Rome, Istanbul, Karachi and Bombay. How about: London-Rome-Khartoum-Nairobi-Johannesburng? In the 1940s, Qantas’ so-called “Kangaroo Route” made six stopovers between London and Sydney.

These were known as “direct” flights. Today the terms “direct” and “nonstop” are used interchangeably, but in the old days a “direct” flight merely meant there’d be no change of aircraft or flight number.

A lot of this was necessity. The range and payload constraints of older generation aircraft made nonstops unfeasible beyond a certain distance. But part of it, too, was efficiency. Carriers needed fewer planes and fewer crews.

Modern examples still exist. A couple of years ago, traveling to Bhutan, I boarded a “direct” flight from Bangkok to Paro. Along the way we spent 35 minutes on the ground in Gauhati, India, a city I had never heard of before. 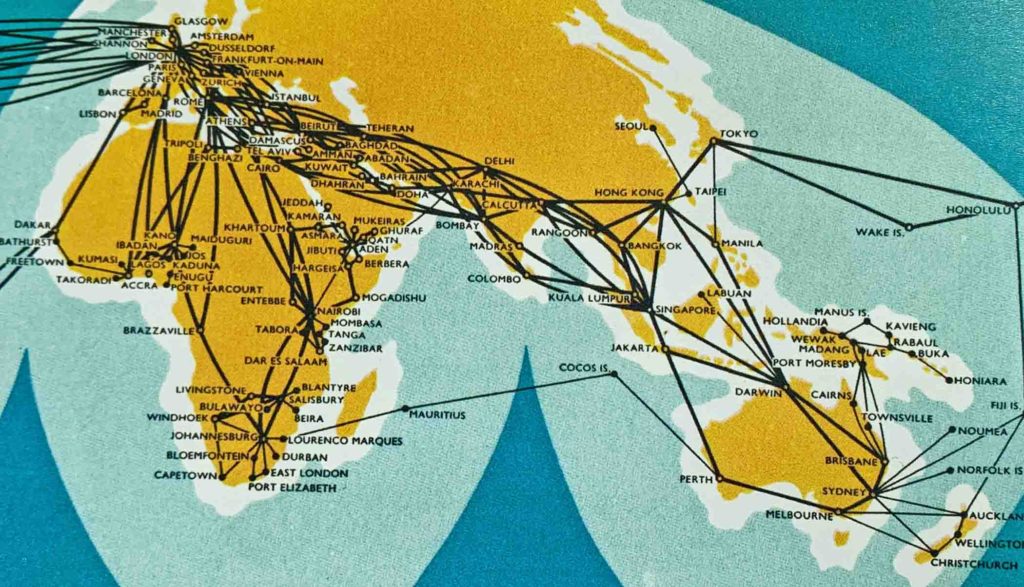 The maps above (and below) are lifted from “Airline Maps, A Century of Art and Design,” a new book by Mark Ovenden and Maxwell Roberts.

I’ve been infatuated by airline route maps my whole life. They are what turned my passion for commercial aviation into a love of travel as well: a way of graphically understanding the airplane as something bigger than a means to an end. There’s something oddly meditative and Zen about them. As a kid, whenever I got hold of an airline timetable (back when such things existed) the first thing I’d do is open to the route map. The best were the center fold-outs, with the extra third page. I could spend hours studying those those arcs and lines. “Next time you’re wedged in economy, flip to the map section in the back of the inflight magazine,” I write in the introduction to my book. “Those three-panel foldouts and their crazy nests of city pairs were, for me, a kind of junior pilot porno.”

As you’d maybe expect, the authors spend most of their time in the decades between 1930 and 1970, when airline iconography and graphic design became an artform all its own. The selections from this period range from cartoonish to elegant, many of them nothing short of cartographic marvels. Almost all of them are colorful, whimsical, and historically evocative. Now departing for Leopoldville, Leningrad and Calcutta: it’s the history of air travel, design, geography and geopolitics all at once.

Most carriers still produce route maps, viewable online or in their magazines. They’ve become a lot simpler, and the presentation can be confusing. Some have done away with lines and rely only color-coded dots for destination cities, giving you only half the story. Worse are the ones that include the flights of code share and joint-venture partners, leaving the maps so cluttered you can’t make sense of them. 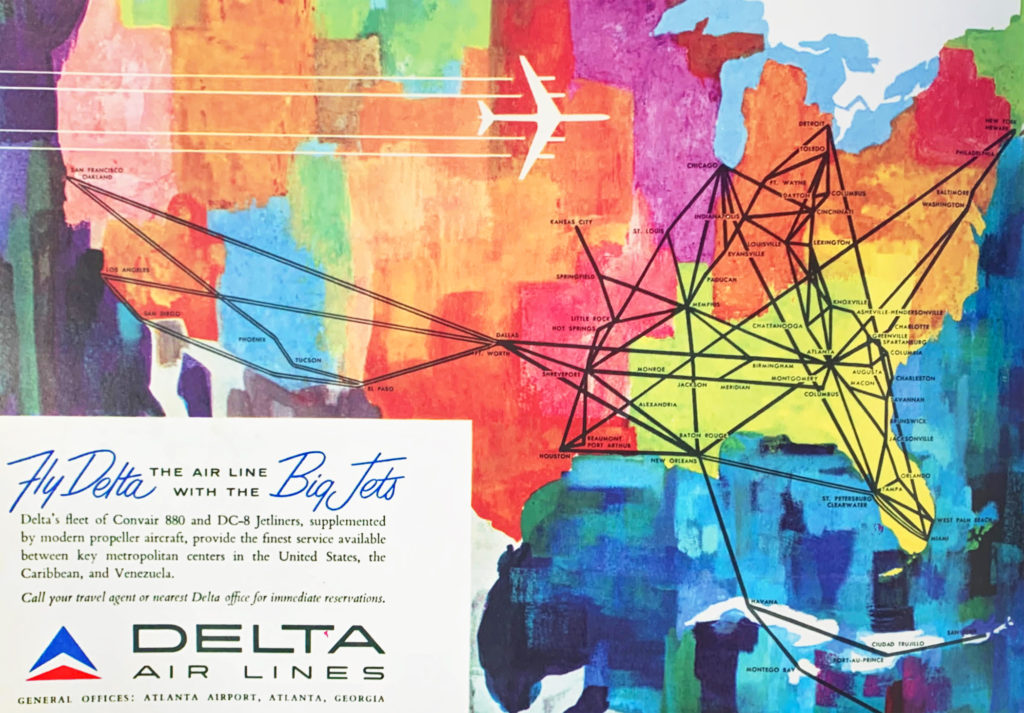 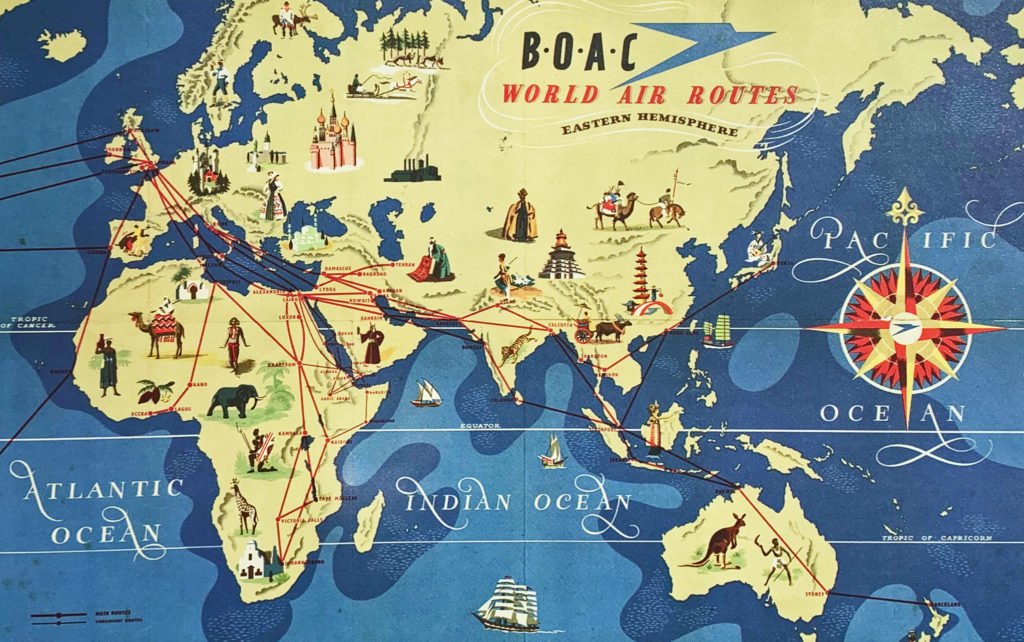 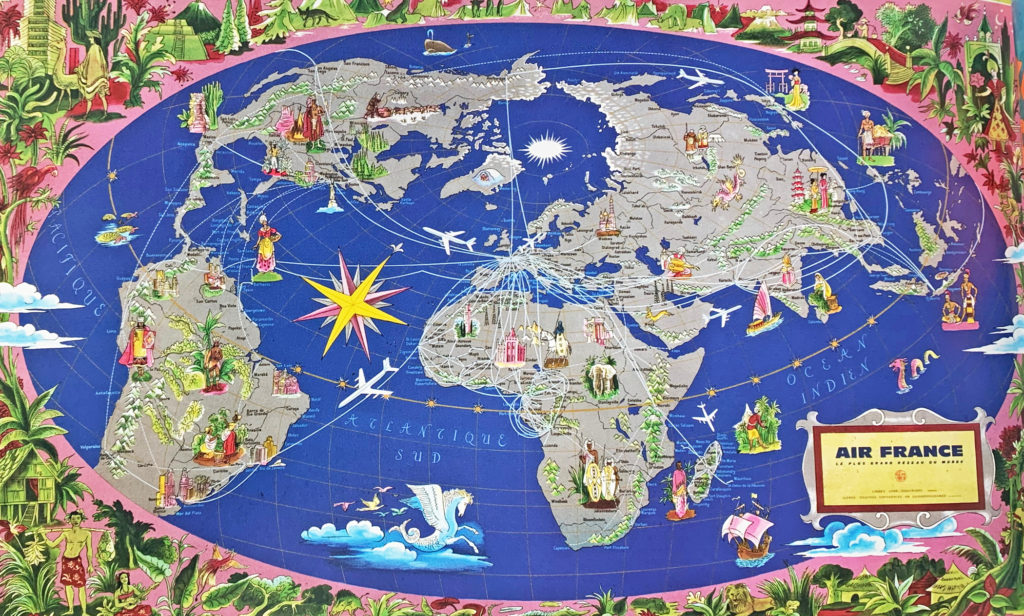 HOMAGE TO THE BOARDING PASS WALLET