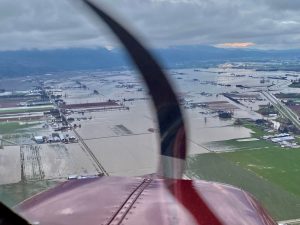 November of 2021 saw a new phenomenon with the advent of an “atmospheric river” (a new name for what we had known as “The Pineapple Express”), dumping vast amounts of rainwater on the Fraser Valley in the lower mainland and parts of the southern interior of the province of British Columbia.

Over a hundred years ago, the Sumas Prairie was known as Sumas Lake until it was drained and became valuable farmland. This low-lying land was inundated by overflow from a nearby river in Washington State. Added to this loss of farmland, hundreds of homes and farms were flooded. The damage to vegetable and berry farms, livestock and poultry was still uncalculated at this writing but is anticipated to exceed $2 billion just in the Abbotsford area.

In addition to the lower mainland, all major highways and rail lines connecting Vancouver to the rest of Canada were severed. For days, no freight moved in either direction. One highway was so badly damaged with the loss of five bridges that it may take up to a year to repair. Another secondary road between Merritt and Lillooet may never be rebuilt. Others were opening temporarily only to be closed again as yet another atmospheric “river” arrived.

Towns and villages were under evacuation orders as they were either flooded or cut off from all road access. This meant no food, no water—none of the necessities of life as vital truck supply routes were closed. Landslides shut all roads to the interior and also caused the loss of four lives as their vehicles were buried in the slides. A fifth person is still missing.

Into this chaos stepped the owner of the West Coast Pilot Club, a local flying club at the Langley airport. Club head Shaun Heaps made the club aircraft available to volunteer pilots to fly relief supplies into Hope, Merritt, Princeton and many other cut-off communities. Others supplied their own aircraft expecting nothing more than fuel reimbursement. Fixed-wing aircraft ranged from Cessna 172s thru to 185s and Cardinals. Piper Warriors and a T-tailed Arrow rounded out that group and were also in the lineup waiting first for weather then for their loads. Pilots’ experience ranged from 150 hours of recently licensed pilots to airline pilots with over 20,000 hours.

Flight instructors volunteered and were on hand to ride along with any unfamiliar with either the destination or mountain flying.

While each was assigned a destination, there was a need for relief in several other communities that had no airport or strip. Into that void stepped the helicopters, a Jet Ranger and an Aerostar, also flown by volunteers with only the fuel covered.

Brenda Lennax supervised the loading and the product mix being included for each flight. This ranged from dog and cat food and water to diapers and bread. It was a food bank with wings. Each aircraft was carefully loaded to ensure that the weight was properly distributed and no overload occurred. Cargo nets and bungee cords were used to secure the load as turbulence was expected. In just one day, they moved 35,000 pounds of vital material. In addition to deliveries of much needed product, the group were able to evacuate many trapped people.

Help and assistance came from everywhere. Telus provided cellphones, and the Sikh community stepped up and provided vast amounts of supplies. Volunteers came from all over the B.C. lower mainland and even Vancouver Island to get involved in all the work of preparing skids of product for each flight.

Heaps put all of the fuel used on his personal credit card with no assurances that he would be reimbursed.

All of this was extensively covered by the local and national press. Camera crews and on-air personalities from CBC and Global TV conducted interviews with Heaps and others.

Transport Canada sent a couple of staff members to observe the operation and seemed happy with the controls that Shaun had put in place to ensure a safe operation. Nav Canada initially had concerns but eventually came around to see that this emergency required the cooperation of all.

While still operating relief flights, Shaun is thinking ahead to the possibility of having to do this yet again. In order to have pilots trained he is exploring the idea of creating a version of the USAF Civil Air Patrol. This group would be trained in the basics of search and rescue and disaster relief.