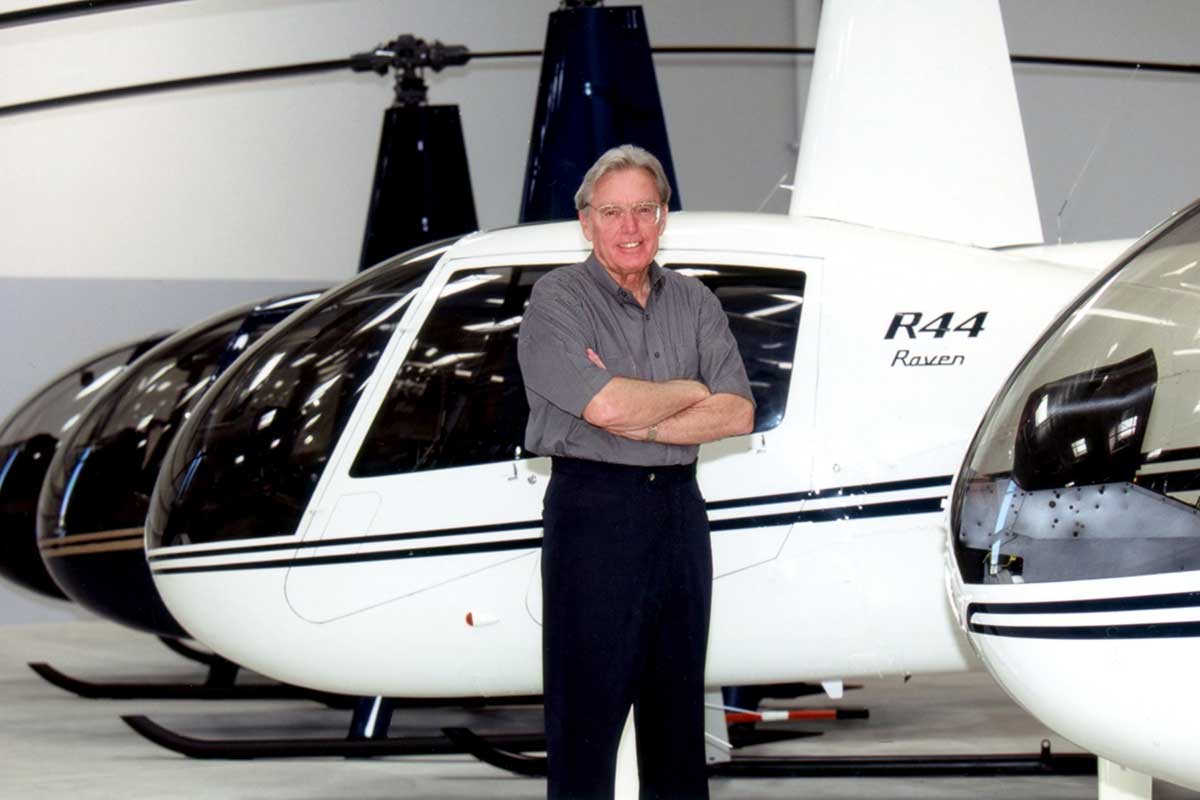 Frank Robinson, the legendary founder of Torrance, California-based light helicopter manufacturer Robinson Helicopters, died on Saturday at his Rolling Hills home in Southern California. He was 92.

The company that Robinson founded in the early 1970s wasn’t just another aircraft manufacturer, and Robinson knew it. A lifetime aviation enthusiast, Robinson was a talented engineer and beginner pilot when he departed a fledgling career working for aviation giants like Cessna, Bell and Hughes to stake a claim out west. What he wanted to do sounded easy enough—to build a small light and affordable personal helicopter that would democratize the world of rotary flight, a segment of aviation that was and remains dominated by large manufacturers of multi-million-dollar craft targeted at military and commercial users.

And he did just that, though it wasn’t easy. After making the first flight of his two-seater Robinson R22, with just 60 hours in his logbook, it would be more than half a decade before the small craft would earn Federal Aviation Administration (FAA) certification.

But once it did, sales of the small helicopter literally took off, proving that Robinson’s dream—that if he built that field-of-dreams machine, customers would flock to it, and they did. The company today has delivered more than 4,600 R22s, a figure that towers over the next most-produced light helicopters. And to achieve that level of production, Robinson the company became a modern, sophisticated operation that today employs more than a thousand people at the same small Southern California airport where the R22 first flew in the early ’70s.

Robinson models, in fact, are annually the most-produced helicopters in the world. In part, that’s because Robinson didn’t let success change his vision. While other companies might have chased bigger clients with deeper pockets by developing ever more sophisticated and powerful craft, Robinson doggedly kept to his vision of building helicopters for the lower arc of the marketplace’s bell curve.

Not that he stopped innovating. By the ’90s, Robinson had led the company to the introduction of what is today the best-selling helicopter in the world, the four-seat Robinson R44, a larger, faster and more capable model. And he went on to innovate again, introducing an R44 model with hydraulic controls, which, while sounding like a modest upgrade, is a remarkable engineering achievement on a helicopter that is small and depends on its low weight to have the kind of performance that customers are looking for. This battle against weight gain is a primary focus for any aircraft designer, but for Robinson it was a life’s work, to the point that the decision of whether or not to add an ounce of gear was a weighed with a strong bias on the principles of simplicity, strength and low weight trumping all. Since the introduction of the R44 in 1993, Robinson has sold around 6,500 copies.

A little more than a decade after the launch of the R44, Robinson introduced the R66, a turbine-powered model that resembles the R44 from which it sprang while providing operators with far greater performance in nearly every operating environment while enhancing reliability.

There were controversies. The R22 was unlike any existing helicopter. With its small and lightweight rotor blades, the small ship requires a light touch. Following a rash of R22 crashes early on, Robinson redesigned the blades and later instituted mandatory trainin, a course of action that reduced the accident rate by a factor of 10. Today, Robinson models have a safety record that is the envy of many fixed-wing models.

Robinson proved visionary in another controversial way, putting life limits on the aircraft the company sold. After a certain period of time, 2,200 hours or 12 years for the R22, the main components must be factory overhauled. The practice isn’t a way to keep customers paying, though. It ensures that Robinson Helicopter has control over the condition of helicopters in both the new and used fleet, a key part of a strategy to reign in litigation costs and keep Robinson in business but, more importantly, its customers flying aircraft that have been maintained to exacting standards.

Frank Robinson, the recipient of numerous prestigious awards for his work, retired from day-to-day work at the factory in 2010. Today, his son Kurt has taken the reins, keeping the company focused on the principles his father lived by in creating the world’s most successful helicopter maker and keeping it a company that is loyal to this day to its founding values despite the success.

A Personal Note
For years, the single most enjoyable evening of the year for me was the annual Robinson Helicopter press dinner at the Helicopter Association International (HAI) convention. It was a small, informal affair generally held at a fine restaurant that served great steaks. As a journalist, I’m supposed to be at least a little unbiased, but I couldn’t help becoming a fan of the man who founded a company unlike any other in aviation. He was plain spoken, opinionated and very funny. His smile, wide and unfiltered, could fill the room. Those dinners were celebratory events even when no one was quite sure what we were celebrating.

The subject was clear, though. We were gathering to talk flying and life and family and aircraft. It wasn’t to advance any agenda, twist any arms or make any bold claims, and as such, it was a rare treat in an aviation world that so often functions in what is often a cold and calculating corporate climate. There was none of that with Frank. He was an engineer at heart, there was no doubt about that, but he was that rare engineer whose values were based always on the needs and interests of the customer and whose vision was informed at first and until 10,000 helicopters later and still counting, remained true.