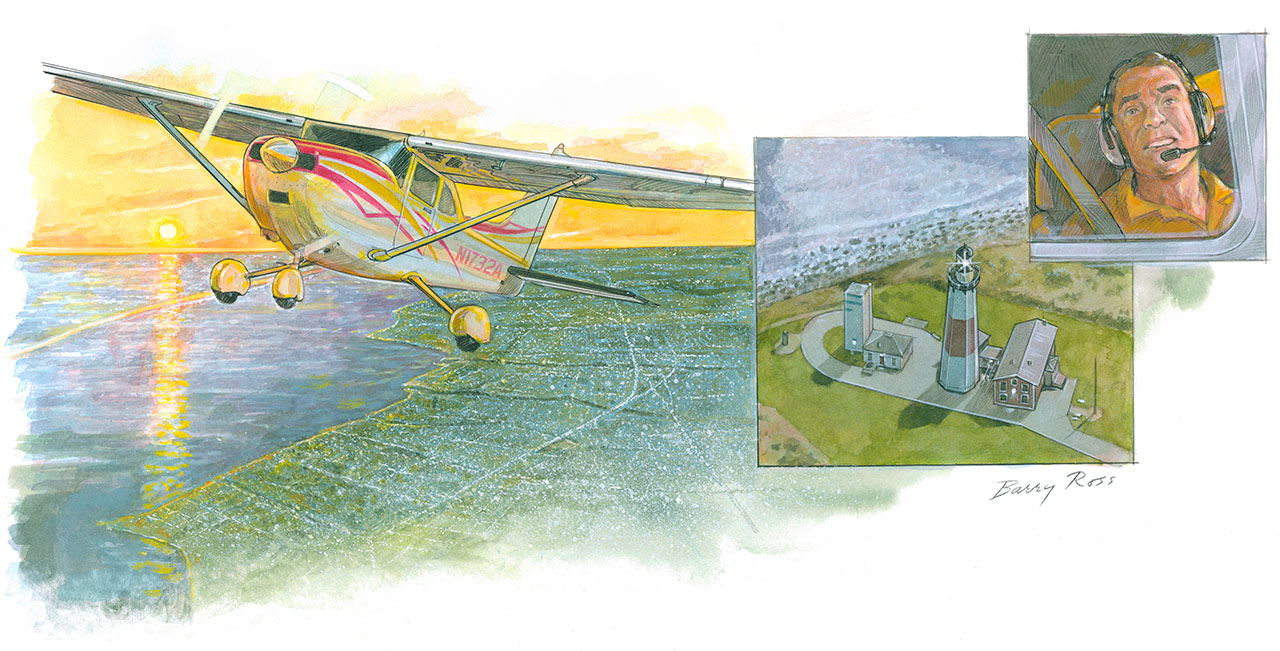 I am not a flyer, and the last time I stepped into a small plane, I was much younger and certainly more adventurous. So when my good friend Eric invited me to go flying in a Cessna, you can be sure that the first thing that came to mind was the image of a parachute. After I took a long pause, the thought of a new adventure had its appeal, and I responded, “Sure, sounds like fun.” I knew Eric was nodding his head affirmatively on the other end of the phone.

As we drove to a small airport located in Islip, Long Island, the following week, I looked out the car window and felt the comfort of knowing there were four steel-belted radial tires touching the solid ground…and that I was behind the wheel. Thinking ahead to the flight, I knew that, unlike most airline travel I had done, there would be no drop-down oxygen mask, stewardess/steward coaching the passengers through an unlikely catastrophic event and certainly no parachute. It takes a lot of trust to step into a small plane and put your life in the hands of the pilot, knowing that the pilot is the only one who is going ensure your safety and the success of the flight.

We arrived at the airport, where I saw a number of small planes on the airport apron. They all had that elegant look, their elongated bodies attractively painted as they tapered to rounded noses designed to reduce wind drag. They looked small but mighty. As we approached the plane that we would be flying in, a smaller craft toward the back of the ramp near the runway, that confidence began to fade. Eric went over as I stood by watching, and he started an inspection. I did feel reassured when given an explicit play-by-play of his pre-flight inspection, watching him go through each and every step as he checked the propeller, the wing flaps, the tire pressure, the instrument panel and various other details. And his heartening description of the superb worthiness of the Cessna, its state-of-the-art computerized panel, its TAWS system, and the fact that he had never had a crash in all his days of flying were most comforting. When I asked him what the plane was made of, he responded, “aluminum,” which had a reassuring ring.

For a moment, I almost felt comfortable squeezing into the front passenger seat—until I saw Eric outside taking samples of gasoline from various fuel drains and bleeding the fluid into a glass jar. After climbing into the pilot seat, he readily explained that the bluish gas must be checked for fouling or water contamination. I nervously nodded, thinking about the potential for engine failure on takeoff. With a second once-over of the instrument panel while marking down some figures on a notepad, he adjusted his headphones and instructed me to put mine on. I heard the yammer of the tower as he motioned for me to bring the mike closer to my mouth.

He gave me the thumbs-up and, after some communication with the tower explaining his flight route, he received clearance for takeoff.

We taxied a bit to what he described as the short runway. In my mind, I thought the longer the runway, the better, having heard stories of the runway in St. Bart’s notorious for its shortness and difficulty. I had no time to worry. Eric started pressing some buttons and pushed the throttle all the way in. The plane raced forward at a rapid pace and, to my surprise, we were airborne in no time at all with what felt like a minimum of effort.

As we ascended into the dusk light, my nerves got the better of me, and I gripped the seat, stiffening my back, and peered below, seeing our footing on solid ground rapidly disappear. The world I was familiar with grew smaller and smaller. It was then that I recalled Eric telling me that as long as we attained the altitude of 1,200 feet, if the engine stalled or spluttered, we would be able to turn around and land safely. Searching, with my ears keenly listening to the engine for any gurgling of mechanical indigestion, I found the altimeter on the instrument panel and kept my eyes glued, watching the needle slowly climb to 1,200 feet. With each 100 feet, my stomach slowly unclenched, and then I breathed a sigh of relief.

When my stomach had finally relaxed, I again looked out the window and was taken by the beauty of the terrain below—everything in miniature, an organized landscape, like a game board. The Atlantic Ocean to my right spreading out in all its glory, the sparkle of many a light bouncing off the waves and illuminating the shoreline. Tiny beetle-like cars with glowing eyes crawled along the roadways. What were mansions on land looked like toy houses from above, appearing neatly side by side, a silent testament to suburban planning. It was certainly magnificent.

As we continued our easterly flight, the sun setting behind us in a warm glow, Eric masterfully attended to a number of dials, pedals and knobs, all the while listening to the chatter of the tower cackling instructions through his headphones. It was then that I really started to enjoy the flight, knowing I was in the best of hands. Though now closer to the heavens, I stopped silently, invoking a prayer in my head.

We steadily flew into the evening as night overtook the dusk. Eric let me know that the weather conditions were perfect, with a minimum of wind and noticeable lack of turbulence. Nearing the end of the south fork of Long Island, I could see the white-crested waves roughly brushing the shoreline. We circled the tip of the East End around the ever-watchful Montauk Lighthouse. The gentleness of the night sky, seemingly infinite, and the hypnotic hum of the engine heightened my senses, and I was able to fully appreciate Eric’s love of flying: his appreciation of the mechanical ingenuity granting us the freedom to explore the skies in a metal tube with wings weighing over 2,000 pounds and his appreciation of this other world that resides above us.

We headed back along the North Fork. Peering down, I observed Shelter Island and surrounding villages from a different perspective. I enjoyed the smooth gliding through the night’s air, surrounded by twinkles above. I looked into the sky, observing the choreography of dancing stars watched over by the faint luminosity of distant planets. A universe to behold.

Cruising at about 140 mph, we neared our starting point, and Eric started our descent. I felt the nose dip toward mother earth below, and the distinct images of surface vegetation and structures took on shape.

As I peered out below, I heard coming over the airways a voice from the controller, who informed all nearby planes that the tower was shutting down for the evening. I looked at Eric, but he did not seem concerned, and I deferred my questioning. On our eventual, slow descent toward the runway, even when the lights illuminating the narrow strip momentarily disappeared (Eric explained, because the tower was closing for the evening) and all went dark, my heart did not flutter, and the peacefulness of the connection with the night sky flowed within me. My serenity was confirmed when the visual approach lights engaged, activated by Eric through microphone radiofrequency communication. All was well as we touched back down, and the Cessna evenly came to a slow crawl, and we taxied to our starting position.

I came back to earth, leaving behind memories imbued with beauty and the freedom of the sky, knowing that the desire to again take to the air had been kindled within.

Read “Fear Of Flying” for advice to get reluctant friends and family in the air.