Lessons Learned: Know When To Call It A Day

Home How to Become a Pilot Lessons Learned: Know When To Call It A Day 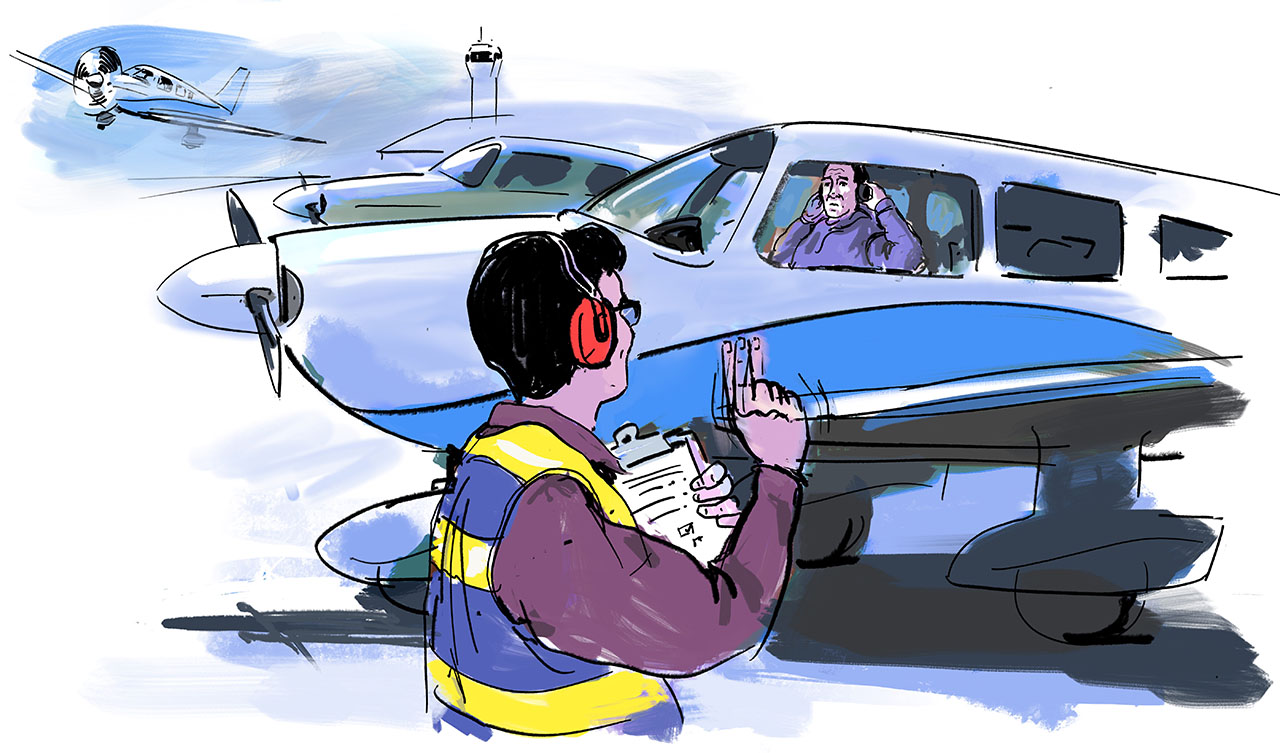 Along the Gulf Coast of Texas, we are occasionally, after a cold front moves through, blessed with almost perfect flying weather. The humidity drops, the temperature cools, and all plans for being in the office drop away. And you’re not alone, as almost every pilot within 200 square miles decides to head to their airport of choice to alight and burn holes in the bright blue sky.

Not that long ago, I was looking out my window at such a morning, and I said, “Darn it, I’m going flying!” I called up the training center where I rent my favorite steed—a well-worn Piper Warrior—and found that said steed was “down for maintenance” (an indication of things to come; call it Sign #1), but they kindly offered me an equally well-worn Archer (for a few dollars more per hour) to carry me skyward. I gladly accepted (more horsepower is always worth it, right?) and headed off as fast as the big-city traffic allowed (in other words, glacial—Sign #2).

When I arrived at the training center, the weather was clear with light crosswinds, forecasted to get gusty later. I checked in, was handed the “can” of the required docs, keys, fuel strainer, etc., and was pointed vaguely toward a line of aircraft. I happily marched out to the flight line, hopped into the Archer that was parked in the spot where my assigned Archer was “always” parked and started the cockpit part of the pre-flight. I plugged in my headset, hit the Master Switch to make a quick check of the fuel gauges to see if I needed to order fuel, and got out the docs in the can to check the Tach and Hobbs times.

“Hmm,” I pondered. The Archer’s times were not even within the same galaxy as the figures on the can’s docs. While my brain was absorbing this discrepancy, my eyes caught the motion of a lineman coming to my left window. “Sir, you’re in the wrong aircraft,” he politely said with just a hint of “you, dumb bunny” in his voice. Yes, it was true. I had placed my carcass on (actually, within) the wrong steed. (Sign #3.)

With measured purpose and forethought, I surveyed my assigned Archer, checked its registration N-number about 20 times, and hopped in. Cockpit pre-flight completed—carefully and completely. Same for the exterior pre-flight. It’s time to start this baby up and get flying! I followed the checklist like my life depended upon it (which, in a way, it actually does, right?) and hit the starter. Wrrrr, wrrrr, wrrrr wrrrr, etc. Not catching. Okay, I tried monkeying with the mixture and throttle. Same result. Just then, the same lineman waved at me; I shut things off, and he came to my left window again. “This bird is a bit tricky to get started. So, [rapidly do this, while slowing doing that, cross your fingers, pat your head/rub your tummy, think positive thoughts],” he helpfully directed. (Sign #5.)

At long last, the motor caught, and I got going. I contacted Ground Control and told them that I wanted to stay in the pattern to do touch-and-goes. I taxied out, did my run up, and was ready to fly!

Or so I thought, because while self-detained earlier, the three flight schools at the airport had decided to disgorge their fleets simultaneously, so the taxis, runways and the controller were all suddenly busy. Down by the end of the active runway, there were about four aircraft ahead of me, waiting to take off. Again, with lots of aircraft coming and going—and don’t forget to add in the occasional meandering helicopter doing pipeline inspection—it took a while for me to be first in line.

When I was, I slowly taxied forward and contacted the tower. No response. Yes, the radios were fine—I hadn’t messed them up, which would have been par for the course that day, but it wasn’t. That, I checked! I decided to wait a minute. After all, the controller was busy. So I waited a bit more before my patience gave out. Okay, I thought, I’m paying for the time, the engine is running, my bill keeps going up, and I’m going nowhere.

So I called the tower and nicely and politely restated that I was ready for departure. I was blasted immediately with an admonishment that the controller was well aware of my piddling little existence, as he was busy trying to keep jets and numerous other airborne aircraft from hitting each other and falling out of the sky, that I was safely on the ground, and he’d get to me whenever. All I could do was key the mic twice. (Sign #6.)

But then, as I was visualizing my VISA card balance climbing at best angle toward my credit limit, the controller told me that I was cleared for takeoff, to expedite it and keep the pattern close. I acknowledged and off (finally) I went into the wild, now a bit blustery, blue yonder.

Turns out that that gusty crosswind forecasted had decided to arrive a bit earlier than predicted. It forcefully made its presence felt. Just as I lifted off, a sideways gust of wind ricocheting off of a nearby hanger decided to rapidly move me laterally and yank a wing downward. Well, now, that was fun—not. Easily handled, but a darn good attention getter. I was awake before, but now I was awake! (Sign #7.)

Up, up I went and turned up-wind. The tower frequency was filled with nonstop calls to various aircraft to turn some compass direction, to contact departures, to extend their downwind, to watch for another aircraft on a 3-mile final, to be cleared as number 6 for landing, following two Cessnas, a Gulfstream, an Experimental, a Learjet, and a kite. Had I been magically transported into arrivals at LaGuardia? I turned downwind and was slowly motoring along looking out for the other aircraft that I was mentally trying to locate from the radio chatter, awaiting my call to turn base. I knew better than to call up the nice (busy) controller, so I kept motoring along, now on the world’s longest downwind.

I was getting a bit worried that I was going to hit the impenetrable big-city Class B south of the field when I was told to turn base and watch out for traffic now coming directly at me at my altitude, as the incoming bogey was about to turn final and land on the parallel runway. And, oh, by the way, they added, you are number three to land.

The term “oncoming traffic” always gets my attention, so while I was looking before, now I was seriously looking! Just to be safe, I had every nav light, beacon, strobe, taxi light, landing light and even the interior dome light on. I really wanted to be seen. I kept looking for the impending head-on collision, but apparently they had turned at the right time.

“Turns out that the gusty crosswind forecasted had decided to arrive a bit earlier than predicted. It forcefully made its presence felt.”

Then I thought it. “That’s it—enough’s enough!” is what I thought. “I’m not about to have folks read about my “pilot error” in an NTSB accident report. I’m in the middle of a beehive of aircraft. I can’t detect a @#$% aircraft right where it’s supposed to be. And I have been presented with more “signs” than the Department of Transportation has in its annual procurement plans.”

I told the controller to cancel the touch and go and that this was going to be a full stop. (Did I hear pleasure in his voice when he acknowledged?) I made a darn good crosswind landing (always nice to go out on a high note), taxied off, parked and shut down.

I walked into the training center and was greeted with puzzled looks of: Why are you back so soon? I told the old chief pilot, a great guy, that today just wasn’t my day. He gave me an approving and knowledgeable smile.

I had really wanted to go flying, but the truth is, I didn’t need to go flying. In some strange way, it became more and more apparent that I needed to call it a day. I have flown many times since then, at the same airport, at times just as gusty and busy, and have been just fine. But on that one day, it was not to be. As the Athenian orator and statesman Demosthenes said in 338 BC (though probably not about Piper Archers), “He who fights and runs away will live to fight [and fly] another day.”