Lessons Learned: Taking Off On Glare Ice With A Crosswind

Home How to Become a Pilot Lessons Learned: Taking Off On Glare Ice With A Crosswind

by adminMarch 24, 2021March 24, 2021Leave a Comment on Lessons Learned: Taking Off On Glare Ice With A Crosswind 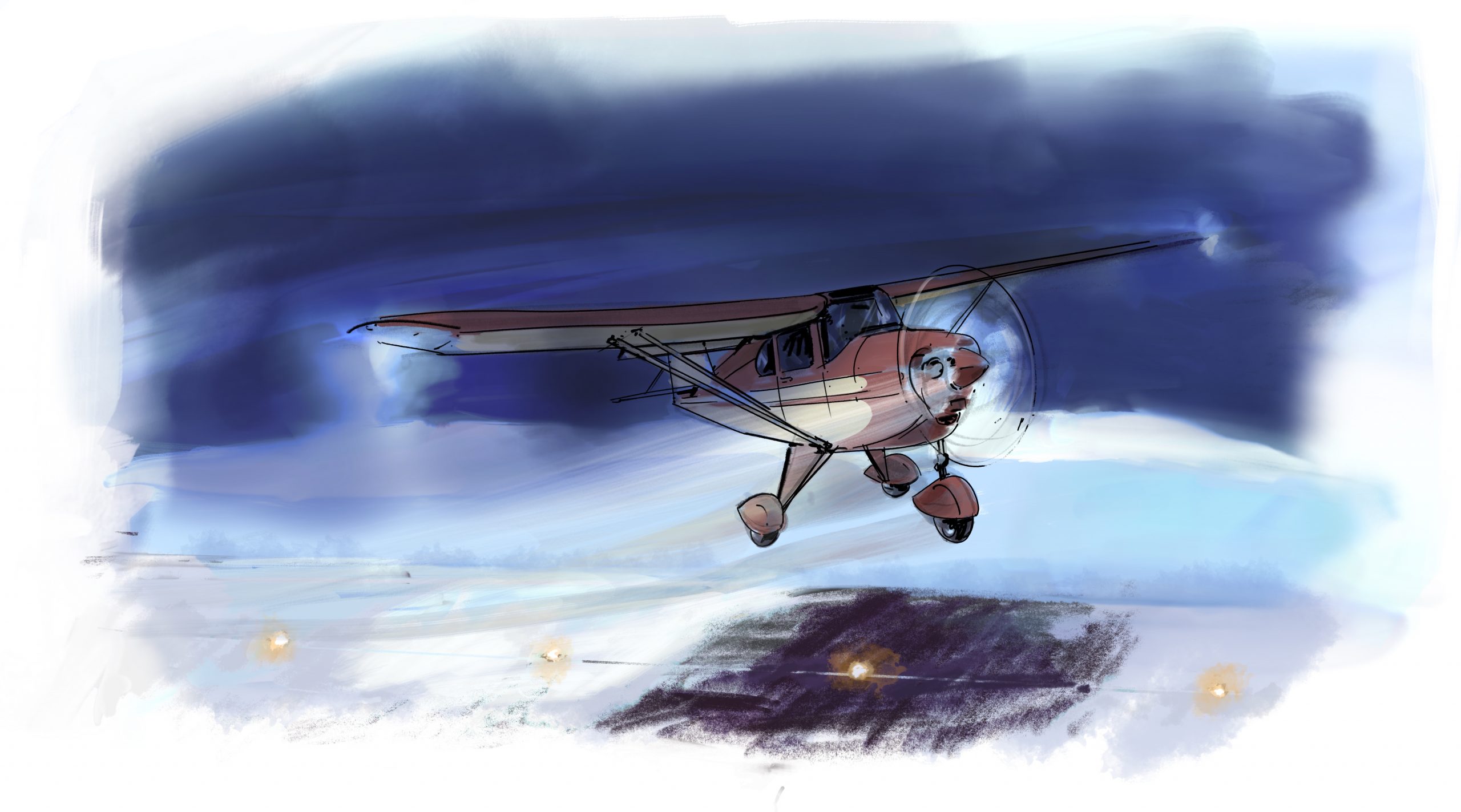 The storied town of Greenville, Maine, sits at the bottom end of the northern part of the state in an area called the Great North Woods. It curls around the foot of 40-mile-long Moosehead Lake and is a good three-hour drive due north from Portland, Maine—three hours if you don’t hit a deer or a moose along the way. Maine averages about 10 such collisions every day.

Greenville isn’t just a long car drive north; it’s a trip back in time. Except for a few swells who have built show-off summer homes on the lake, you feel as though you’ve taken a trip back to the 1950s. It’s a good feeling, and thousands of people go there in the summer to share that feeling.

Not as many venture up there in the winter because it’s cold and snowy. Snowy is too fluffy a word to describe Greenville in winter. The snow up there is like the snow anywhere else in Maine in winter, only deeper.

This was my impression when I landed on a moonless night in January at the Greenville airport. The temperature was right around 15° Fahrenheit, not bad for Greenville, but the snowbanks on either side of the runway, as far as I could see with my Tri-Pacer’s landing lights, were at least a couple feet higher than my wings. And the bottom of my wings are more than 5 feet above the ground. The runway lights were on, but many were buried in the snow. It was around 8 p.m., and the airport, like most small fields after dark, was deserted.

I didn’t have a mission in Greenville. I was just “out flyin’ around at night.” I do that from time to time. Since my 1957 Tri-Pacer (160 HP) sits at an unlighted field all summer, my chances for night flying, other than my commute to Boston, are largely in winter. I move the plane from our unlighted grass strip in Phillips, Maine, to Norridgewock, Maine, for the winter, about 45 miles to my east.

There, I rent an open hangar on a field built as an emergency landing spot for bombers on their way to Europe during World War II. Today, it’s Central Maine Regional Airport, boasting two runways, one lighted, a rotating beacon, a snowplow truck, and a heated and unlocked little terminal house.

The flight from Norridgewock to Greenville took about 40 minutes, flying at 3,500 feet above a half- dozen 2,000-foot mountains and below a star-filled night sky. Except for the odd cabin, this terrain is uninhabited logging country dotted with small mountain lakes. There are long stretches with no lights to be seen from the ground.

As I made the approach into Greenville, I noticed the wind from the north was beginning to soften and shift around to the west. By the time I taxied
to a quiet corner—all the corners of the field were completely quiet—scudding clouds had started to cover some of the stars. In the few minutes I sat there, resting and reading the map with a flashlight, the wind had completely shifted to the south and picked up, in gusty fits. Something else also caught my attention.

When I left Norridgewock that night, I had taken off on good snowpack. We like snowpack in Maine. I don’t know what its coefficient of friction is—it obviously varies with the temperature—but snowpack has decent traction. You can land, take off and taxi on snowpack without more than average caution. Ice (glare ice), on the other hand, is an entirely different animal. Nothing and no one can deal with glare ice—that is, unless your airplane is going straight and easy and no other forces, like a crosswind, are pushing you off a true track. One puff of sidewinder air, and Newton’s Law heads for the nearest snowbank.

The runway at Greenville that night had looked odd. I now gave it closer scrutiny. “Damn, this is glare ice. It must have rained or thawed here recently,” I thought. I turned around and taxied for takeoff in the opposite direction I had landed. The crosswind was now roughly 90 degrees across the runway. I could tell this by some blowing snow. Time to go before it gets worse. I advanced the throttle and headed down the tunnel between the snowbanks.

Right away, the crosswind began drifting me toward the left snowbank. I put in some right rudder and weathervaned about 10 degrees. I had the ailerons tilted that way, too, but I was still too slow for them to take effect. Soon I was 15 degrees right, maybe a little more than that, literally skating slightly sideways down a dark runway. For a long second there, I thought, “Hmm, this is working pretty well.” Then I saw something that changed my thinking. The lights on the Tri-Pacer sit way out on the left wing, so I could see at least a few yards down the runway. And there, coming up fast now, very fast, was a big flaw in this sideways-on-ice idea: a bare spot 10 or 15 yards wide across the runway. No time to think about what would happen if I hit that nice wheel-grabbing asphalt in a full-power sideways skid.

Left rudder, center the nose on the runway, ailerons full hard to the right, full flaps—in a Tri- Pacer, you can yank the flaps down with a Johnson bar in a second—time to get off the ground early, right wing now coming down nicely, holding me square, and “pop,” we are up and into the pure blackness of the North Woods.

As a non-instrument-rated pilot, I have rarely been as happy to glue my eyes to the gauges and make a 30-degree climbing turn back over the airport. There’s no messing about in the dark out here. Greenville has mountains to the north, east and south. I got the snow-dimmed runway lights back in sight and spiraled back up to unoccupied air.

Any time you fly on contaminated surfaces, there’s the possibility that braking and/or directional control could be compromised. But if you want to
fly in the wintertime in any northern state, you’ve got to accept at least some of that risk. For me, the rule is, no crosswind takeoffs on glare ice unless the wind is right down the middle over home plate. You might get away with sliding around on glare ice if you are on a big chunk of frozen lake, preferably one not cluttered with ice-fishing shacks full of happy campers. But snow-free ice on lakes is rarely smooth everywhere. Best to have an avenue directly into the wind, or just wait it out in place. Always have an out, and if you don’t, wait to fly until you do. PP