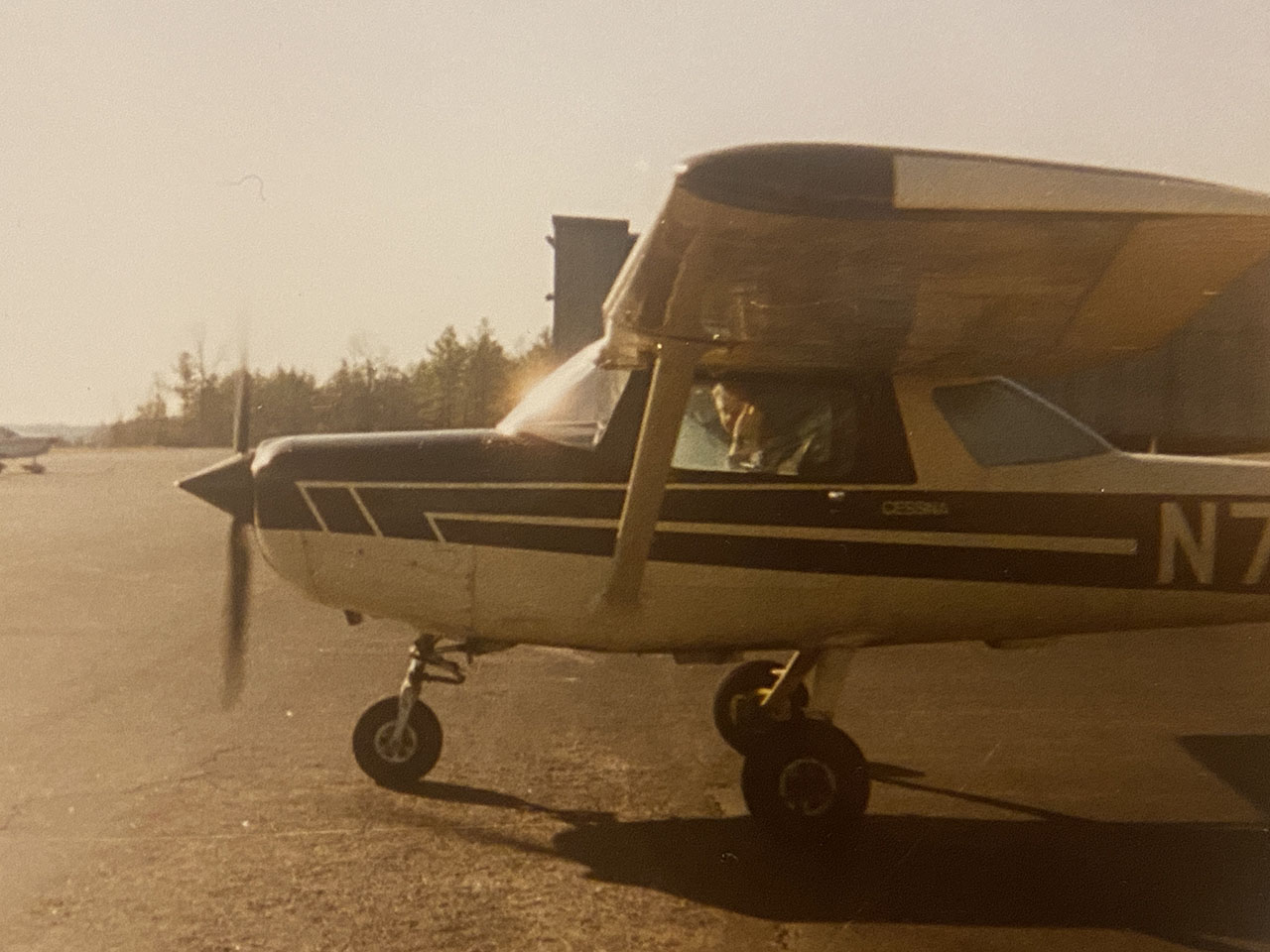 As the world neared the end of a year in the COVID-19 pandemic, one of those significant birthdays drew near—the one that signified my appointments to maintain a first-class medical would happen twice a year moving forward. Social distancing ensured there’d be no surprise party, no crowd of friends telling me I was over the hill, and that was fine by me. It was a much simpler affair than all that. On the big day, I woke up, cooked a pan of biscuits and unwrapped a John Prine album that Amy gave me.

But for several days before and several days to come, my brain was deeply preoccupied with the maze of wires that had exploded like a major spaghetti catastrophe in the Mooney. I’d bought an engine monitor to replace all the old engine instruments, and a bazillion wires were strewn asunder in my effort. That’s a daunting position for any airframe and powerplant mechanic who’d earned the nickname “Sparky” the hard way. I was so focused on the effort, in fact, that I’d wiped my birthday from my social media presence in an attempt to eliminate the distractions as I dove back under the panel.

The Grey Gal had her 1965 engine cluster intact, even though it wasn’t particularly useful. The oil pressure gauge worked great. Everything else was suspect. The left and right fuel gauges were more or less accurate in a range from full to three-quarters, which is where they generally stayed. To change a gasket on the fuel senders, though, I had to drain the tanks. With nothing but air in the fuel bays, one fuel gauge read half full, the other rested at one-quarter.

The cylinder head temperature was right in the middle range in flight, which is great. But it stayed in that middle range after landing, when I pushed it into the hangar, and when I’d pull it out for the next flight. And as for the ammeter, it wiggled a little when I turned the landing light on, but it refused to indicate anything meaningful. A 1997 vintage JPI EDM 700 offered me solid numbers for the most part, but its display had a critical digit that was failing—the spot on the screen that told me whether my cylinders were happily in the mid-300-degree range or spiking through 400 degrees.

I spent more than a little time studying my options. Some were as simple as replacing my JPI’s display with a newer, larger, colorized screen. The price was right, but the application was not—the unit would serve as a secondary indication, meaning my 1965 cluster that nobody wanted to repair would still legally be required. A few more AMUs thrown at the problem netted me a primary indication system from JPI that would replace the cluster, tachometer, manifold pressure and fuel pressure gauges as well as the old EDM-700.

If the term AMUs is new to you, let’s fix that problem right now. They’re Aviation Monetary Units. Spouses, partners and accountants all seem to balk when you start throwing crazy monetary figures around. “Honey, the shop quoted 10 AMUs for an engine monitor install” is a much less stressful way of saying you need $10,000 from the piggy bank. AMUs are thousands of dollars; anything cheaper than an AMU can be referenced in actual dollars. Go ahead and try it out next time you need to spend money on your airplane, and see how it goes. Make sure to write us and let us know your results.

As I lay under the instrument panel with a pair of wire cutters in hand and the old wiring diagram spread across the floor next to me, one of the neighbors strolled up. Opening the hangar door on an airpark is basically an open invitation to anyone around, and the stories flew as the tie-wraps and old wires fell. Some mention came up of the birthday thing, and then a question followed: “Since you were the airport kid, I guess it’s the anniversary of your solo, right?”

Nope. After a couple years of reading EAA magazines with smiling faces of kids who soloed on their 16th birthday, I got slapped with a double whammy of regulatory and meteorological challenges as that big day approached. Trying to get my student pilot certificate—back then, the third-class medical was the certificate itself—was a roadblock. I went in for the exam and passed with flying colors after I had squinted at the eye chart for a long moment. After I’d signed a check and handed it across the counter, the doc looked me in the eye and said, “You can come back on your birthday and pick up the medical. I don’t think I’m allowed to issue it until you’re actually 16.”

When I showed up early on the morning of my birthday, the doors to his office were open, but the receptionist informed me that he’d been called into the hospital for an emergency, and he hadn’t signed my medical. “He’ll be in sometime later,” she insisted with a weak smile but remained noncommittal on the timeframe. It didn’t matter. A gray, cold wall of weather was nearing, and within hours we’d be socked in. There was no post-solo breathlessness to impede me from blowing out the candles that evening.

The weather moved through, pushed out by a persistent cold wind, and the Cessna 152 strained on its tiedowns when I finally drove out to the airport with a yellow student pilot certificate in my wallet. Irving “Doc” DeGaris, my instructor, just shook his head. “There’s no sense turning you loose in this gale,” he said, as he prepared to head out on a quail hunting trip in his Cessna 182RG. The retired dentist had a soft spot for me, having let me earn many hours in his tutelage by keeping the bugs and grease off his Cessna and his Great Lakes biplane. “You got your logbook handy?”

I raced to my car, wondering what the old man had up his sleeve. I returned, logbook in hand, and he flipped to the back. He filled out my solo endorsement, with a caveat for 10-knot winds, maximum, and slid it across to me with a smile. “You’ll be fine, boy. Just don’t do anything to put a damper on my hunting trip.” He loaded up his Skylane RG with bird dogs, shotguns and a big cooler, and left me staring at the weather display in the FBO, longing for a single-digit wind value.

Eight days later, the sun rose, and the wind finally took a break for a few hours. I had the Cessna 152 reserved, but a layer of frost paused my progress. As I waited impatiently, the ranks of observers swelled. My parents were joined by grandparents, aunts, uncles and cousins as we waited. Finally, my friend Rob Haley emerged from the FBO hangar with the cleanest push broom he could find, and we cleared the melting frost. I climbed inside, fired up, and took off just as I’d done plenty of times before under the watchful eyes of other pilots. Between the cold air and less-than-gross loading, the trainer flew beautifully as I made three circuits around the pattern. I landed, shut down and, of course, someone found a pair of scissors to mark the occasion as my shirt tail became its own entity. Nobody had to ruin Doc’s hunting trip, after all.

Continuing the trend of missing the mark on milestone birthdays, I was well clear of all age restrictions by the time I mustered enough money to finish off my private ticket. When I sat down for my private check ride, I had collected nine of those 90-day solo endorsements in my logbook. Others have taken longer to finish off the certificate, I’m sure.

As I finished the tale and connected a few wires, I took a very deep breath and flipped the master power switch. The master relay clicked, but nothing else happened. I had pulled every single circuit breaker, out of a fear that my electrical shenanigans could revive the Sparky moniker. With more than a little trepidation, I reset circuit breakers one at a time, with a sharp lookout for any smoke or smell of burning insulation.

Finally, I pushed in the circuit breaker for the engine monitor. The startup screen flashed, and then the cascade of error messages began—completely expected since only one or two probes were hooked up. But 12.2 volts seemed about right for a battery that’d been sitting a little while, and as I continued to hook up probes, everything settled in within a degree or two, the most precise engine indications I’d ever hoped for. You can have the big parties for milestone birthdays. The satisfaction of throwing the power to my airplane after major surgery and it not ending in a pile of embers is good enough for me.