“Miraculous.” No Fatalities As Chartered MD-87 Crashes Near Houston. 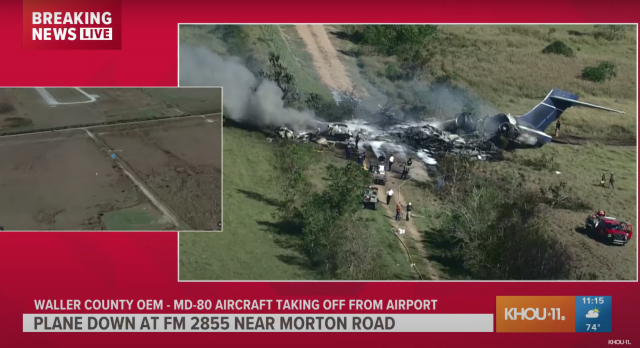 No one was killed when a privately owned McDonnell Douglas MD-87 crashed in Waller County near Houston on Tuesday morning, apparently after going off the end of the runway during an attempted takeoff. The passengers were headed to Boston to see Game 4 of the Major League Baseball American League Championship Series at Fenway Park in Boston.

The plane crossed a roadway and came to rest, bursting into flames. Early reports are, and this is hard to believe seeing these photos, that all 21 passengers and crew escaped the wreckage with only one casualty, a back injury, among them. Kudos to the passengers and crew for pulling that off.

The MD-87 is a stretched version of the MD-80, which is a modernized and stretched version of the Douglas DC-9, for years one of the most popular short-haul airliners in the United States. Within recent years, airlines just about everywhere have mothballed their MD fleets. American Airlines over the years has operated nearly 400 of the various models, all certificated under the DC-9 type.  It retired the last of its MD’s in 2019, when it shipped 26 of them for long-term storage in Roswell, New Mexico. Delta, TWA, Allegiant and Alaska were longtime operators. All of them have retired their fleets. (TWA, of course, is no longer.)

Other airlines around the world still operate the type. There are an estimated 160 of them in current use. For those looking to get their hands on a used one, they can be had cheap. Flyable examples reportedly go for as little as a few hundred thousand dollars.

We’ll update this story as we learn more.