News Analysis: 185 That Crashed In Alaska Came Apart In Midair

Home How to Become a Pilot News Analysis: 185 That Crashed In Alaska Came Apart In Midair 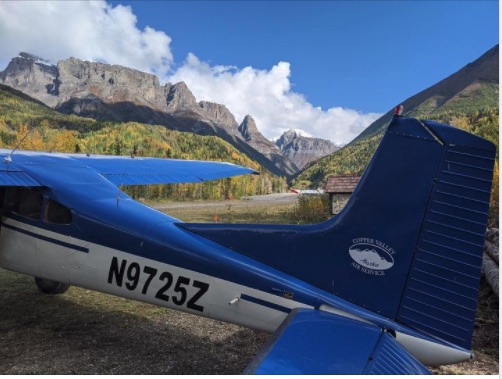 Any time an airplane comes apart in midair is reason enough for investigators to get to work and look closely at the whys and wherefores of the mishap, but in the case of a 1966 Cessna 185 that crashed in Chitina, Alaska, in Wrangell-St. Elias National Park, they have taken a special interest because evidence indicates that the plane came apart in the air last Thursday, killing two.

The weather was reported as mostly cloudy, -14 F, cold, though not by Alaska standards, and calm. The ceilings were not reported, but photos show it to be plenty high enough for VFR below the clouds, and it was in the process of clearing.

The plane was operated by charter company Copper Valley Air Service. The two who were killed were the company pilot, who has not been publicly identified, and a passenger, whose name is also not known.

It happens only some of the time, but the plane was found to be down after its Emergency Locator Transmitter went off. Rescue crews located the wreckage and confirmed that the two aboard had perished in the crash.

The last word was that the Alaska-based NTSB investigator was traveling with a small team to the scene to supervise the recovery of the wreckage for analysis.

It was noted early on that the tail of the plane was found approximately 200 yards away from the main wreckage. When that happens, it is almost always because the plane broke up in the air. In this case, it appears from early indications that the tail came off the plane.

It’s not yet known if there is any data on how fast the plane was going at the time, but in order for a pilot to induce structural failure, it has to be going quite fast, and then an abrupt control input needs to be made. There are exceptions to this, but they are rare. These kinds of accidents are almost invariably related to loss of control and an attempted recovery at high speed. Even in those cases, it’s more likely for the wings to fail than the tail.

Another way that loss of control and subsequent structural damage can occur is by severe turbulence. Winds were calm and temperatures were cold in the area, however, so there’s not much chance that this happened.

The NTSB is aware of all of these factors, and this would explain why they appear to be taking a keen interest in the crash.

A number of Cessna taildraggers (and some early nosewheel planes, as well) are the subject of a new airworthiness directive (AD), which requires that owners have their planes inspected for damage and wear to tail structures, and to make repairs if damage is found. The text of the AD requires the owner to have a mechanic “…visually inspect each stabilizer hinge bracket, tailcone reinforcement angle, corner reinforcement, stabilizer hinge reinforcement channel, stabilizer hinge assembly, stabilizer aft spar reinforcement, and the lower half of the stabilizer aft spar from station (STA) 16 on the left side to STA 16 on the right side for corrosion and cracks; remove any corrosion; and replace any part with a crack…” by following the FAA’s recommended repair procedures. The AD needs to be complied with within 100 hours’ flight time of when the AD was published, December 7, 2020.

It is not known if the Cessna 185 that crashed had the AD complied with—owners who have had prior inspection and repair that complies with the AD’s requirements are given credit, so long as it was within the last more recent of the past five years/500 flight hours.

If it is found that the plane crashed because the tail failed, as early evidence suggests, then it will provide further support for the FAA’s requirement for the inspections and repairs, which affect thousands of airplanes and which will be costly. If the plane is found to have had the required inspections/repairs already but crashed because of the failure of the tail anyway, that will prompt a serious reexamination of the AD.

We don’t know if any of this is true. We don’t know for sure that the plane crashed as a result of the tail failing. But the indications are that it did, and regardless, that is most likely the working theory of the NTSB right now. What they discover upon investigating the wreckage could have major impacts on thousands of planes, their owners and their pilots. We’ll keep you apprised of developments as they’re reported.