The National Transportation Safety Board (NTSB) on Wednesday published a letter urging the FAA to develop and implement new airspace regulations for Ketchikan, Alaska, a popular air tour area. The proposed framework of regulations would be, according to the NTSB release, “…specific to Ketchikan to require more conservative flight visibility minimums and enhanced weather training for air tour pilots flying there.”

Since 2007, the area has seen a string of fatal air tour accidents, a period the Board investigated in forming their recommendations. During that time, there were seven air tour crashes, in which 31 people were killed and 13 seriously injured. The rules are needed, the NTSB wrote, to implement procedures that will be more effective in improving safety, something the NTSB said was much needed. “There have been too many air tour tragedies in Ketchikan, a place with unique—but well understood—safety hazards that endanger the lives of pilots and passengers alike,” said NTSB Chair Jennifer Homendy. “Unless the FAA acts swiftly, experience tells us to expect even more heartbreak and preventable loss of life.” 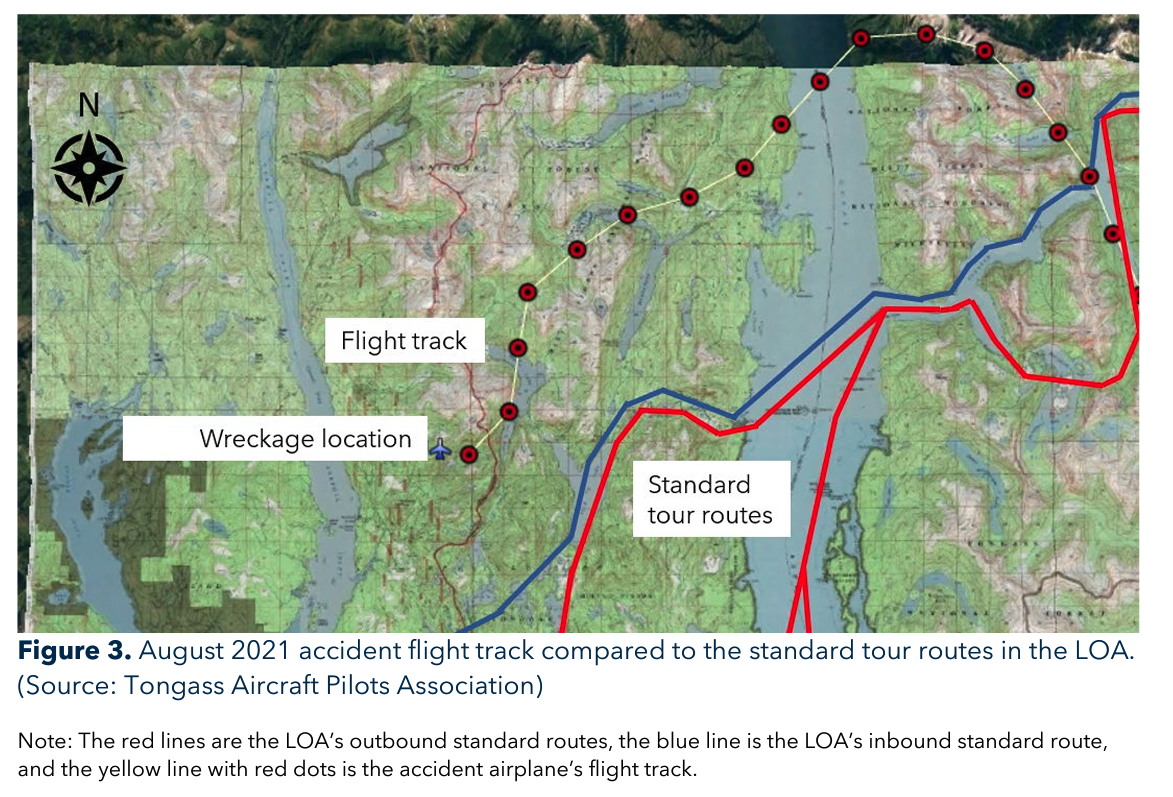 The NTSB panned the current safety plan, saying, “…the FAA’s response to many of its recommendations involved voluntary operator actions that are no longer in effect or that had proven ineffective at mitigating the ‘overlapping hazards’ presented by a rapidly changing weather environment and mountainous terrain. Both are often factors in fatal air tour crashes in Ketchikan.”

In its report, the NTSB discussed the most recent fatal air taxi (Part 135) accident, which occurred in August of 2021. On August 5, 2021, a De Havilland DHC-2 airplane, N1249K, which was operated as a Part 135 air tour, impacted heavily wooded, mountainous terrain near Ketchikan. The pilot and five passengers were fatally injured, and the airplane was destroyed. A review of weather camera imagery, forecasts, weather observations, and passenger photographs revealed that while the pilot was conducting the flight under visual flight rules (VFR), the airplane entered a narrow valley and encountered deteriorating weather. As the cloud cover increased and visibility was reduced due to precipitation and mist, passenger photographs show that the pilot flew at lower altitudes, consistent with a passenger report from the pilot’s previous flight where he attempted to remain below the cloud ceiling and avoid entering instrument meteorological conditions (IMC). On the accident flight, the airplane impacted mountainous terrain in IMC.2 The NTSB determined the probable cause of this accident to be, in part, “…the pilot’s decision to continue visual flight rules (VFR) flight into instrument meteorological conditions (IMC), which resulted in controlled flight into terrain.”

There was a wealth of evidence the accident investigators had to work with, largely because the electronic devices of several of the passengers aboard the accident flight were recovered, and many contained photography and videos of the accident sequence.

In the report, the NTSB wrote, “Based on passenger photographs and videos, the accident pilot likely flew close to the right side of the valley where the accident occurred. Ketchikan air tour pilots typically fly along the side of valleys to avoid collisions with other aircraft or to provide more room to reverse course if they observe deteriorating weather ahead, such as low clouds or poor visibility (see the accident valley in figure 2).

There’s a big caveat here, though, the Board wrote, “Many valleys in the area are too narrow for an airplane to make a full 180° turn to avoid entering or to escape an inadvertent entry into IMC.3 In post-accident interviews, two pilots familiar with the valley where the accident occurred stated that they thought it was likely too narrow to safely execute a 180° turn in an airplane.”

At issue is the nature of the current voluntary operating procedures, which the NTSB called ineffective and suggested were often not adopted or used by air tour operators. Instead, the NTSB is calling on the FAA to put into place operating rules that would be mandated, comparing the intended rules to those established by the FAA decades ago for air tours operating in locations in Hawaii and over the Grand Canyon. Those Special Flight Rules Areas (SFRAs) have very specific operating limitations to prevent the kinds of accidents that occur in those locations. The ones promulgated for Ketchikan would consider the flight hazards associated with the terrain and weather in the area and would include more conservative weather minimums.

While the FAA has the authority to write and implement such rules, it is under no legal obligation to do so, at least not based on the NTSB’s recommendations, though the concern about safety in the area is surely shared by those at the FAA. We’ll keep you updated as the story evolves. The 20-page letter from the NTSB can be found here.