Home How to Become a Pilot NTSB Shares Shocking Crash Details, Credits Proposed For Green Gas And A Big 50th For EAA

by adminMay 22, 2021May 22, 2021Leave a Comment on NTSB Shares Shocking Crash Details, Credits Proposed For Green Gas And A Big 50th For EAA 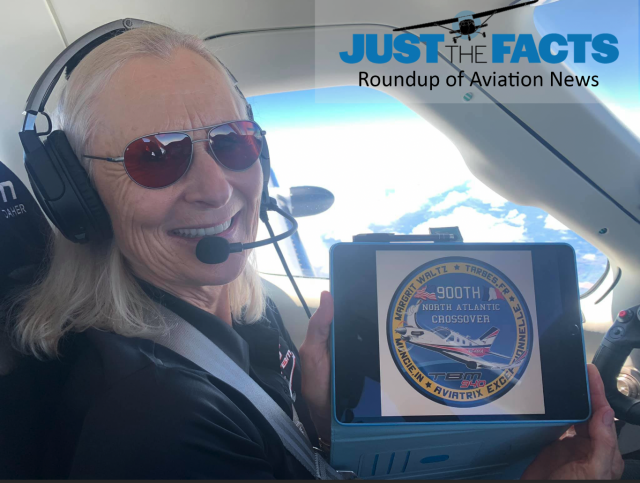 Career ferry pilot Margrit Waltz flew her 900th such mission last week, delivering a Daher TBM940 turboprop single from the Tarbes, France, factory to Muncie, Indiana. Flight time totaled 15 hours and 38 minutes over three days. German-born Waltz, who operates from her home base in Scranton, Pennsylvania, made her first ferry flight at age 20 and has delivered more than 200 TBMs to North America since her first transatlantic mission in 1991. She has also delivered TBMs to Africa, Asia and Australia.

After a Grumman Tiger violated last weekend’s Temporary Flight Restriction (TFR) over President Biden’s home in Wilmington, Delaware, it was intercepted by F-16s that dispensed flares to get the pilot’s attention. According to a Secret Service statement, “Per standard protocol, U.S. military aircraft responded, the aircraft was intercepted, and the pilot redirected to a local airport [New Garden Airport (K57) in Pennsylvania].” The Grumman pilot told the New Garden airport manager that he and his wife were returning home from Ocean City, Maryland, and were unaware of the TFR. After being interviewed by the Secret Service, the pilot was released and flew the Grumman home from New Garden the following day. The FAA told the airport manager that each weekend TFR over President Biden’s Wilmington, Delaware, home averages between four and seven intercepts of general aviation aircraft.

On Saturday night, May 15, under weather conditions described by a witness on the ground as “heavy fog and mist and cloud cover,” a Cirrus SR22 with three on board experienced a loss of engine power and the pilot deployed the whole-airplane parachute. According to the local fire department in Whitewater, Wisconsin, the pilot placed a 911 call from the Cirrus, which was lodged in the tree canopy approximately 75 feet above the ground. It took rescue personnel approximately 45 minutes to locate the aircraft in the heavily wooded Kettle Moraine region. No one was injured and, after a five-hour effort to get them to ground level, the pilot and passengers “were quickly reunited with their families.”

Erik Lindbergh, grandson of Charles Lindbergh, has announced plans for a hybrid electric flight from New York to Paris. The flight is planned for May 2027, to coincide with the 100th anniversary of his grandfather’s pivotal crossing in 1927. He made the announcement in a recorded interview replayed at the “virtual” opening of the European Business Aviation Convention and Exhibition (EBACE) Connect show.

The Experimental Aircraft Association (EAA) announced the Modernization of Special Airworthiness Certificates (MOSAIC) rulemaking initiative remains on track. The regulatory platform is planned to include a new Light Personal Aircraft (LPA) category. The final rule is expected to be implemented in the fall of 2023. (We don’t know what the “I” in the acronym is, either, but it’s still pretty clever.)

The RedTail Flight Academy of The Tuskegee Airmen has ordered a pair of red-tailed Piper 100i trainers and will officially begin training with six pilot scholarships in September 2021.  Plans call for increasing to 30 students per year, aged 18 to 21, by 2026.

The NTSB this week released its factual report on the fatal crash of a King Air BE-300 at Addison (Texas) Airport in June of 2019. The turboprop twin had just taken off when it lost power to its left engine. According to the report, the pilot applied “correction” to the wrong pedal, accelerating the roll into the dead engine and into the ground. The report also cited the pilots’ failure to conduct pre-takeoff checklists.

The General Aviation Manufacturers Association said that the first three months of the year piston aircraft deliveries rose 7.3% and turboprops saw an increase of 18.3%, compared with the same time frame last year. (GAMA) CEO Pete Bunce, said, “It is encouraging to see manufacturers begin to bounce back from the impacts of the pandemic.”

A U.S. House of Representatives bill (PDF) would establish a tax credit for sustainable aviation fuel (SAF). If enacted into law, the Sustainable Skies Act would provide between $1.50 and $2.00 per each gallon of SAF used as long as the fuel “achieves at least a 50 percent lifecycle greenhouse gas [GHG] emissions reduction in comparison with petroleum-based jet fuel.”

EAA AirVenture Oshkosh 2021 marks the 50th anniversary of EAA’s Vintage Aircraft Association. The occasion will be highlighted by gatherings of several antique and classic aircraft types, including the Stinson owner’s group, commemorating the 100th anniversary (held over from last year) of the once-prolific company; and “Short-wing” Piper enthusiasts, celebrating the 70th anniversary of the PA-22 Tri-Pacer, to be joined by other Short Wing Pipers such as the iconic Vagabond, Clipper, Pacer and Colt. Limited special parking areas have been established for these two groups.