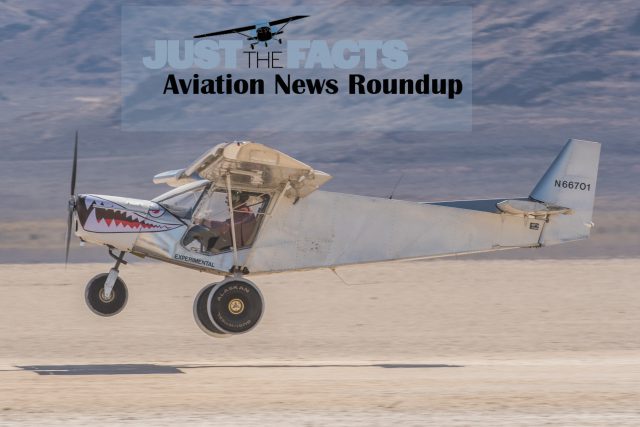 The United States Air Force is recruiting students for its Aim High Flight Academy, where the selected students will get three weeks of training for free. Training will take place at Peter Prince Field (2R4) in Milton, Florida, with Air Force instructors; students will get as much as 15 hours of flight training along with ground school, and more. The application window is open. The training sessions will begin in late May of 2022. A total of 72 students will be accepted into the scholarship program. The application is here.

China was behind two tests this summer of a hypersonic missile design that took everyone by surprise. Testifying before Congress, General Mark Milley, Chairman of the Joint Chiefs of Staff, called the tests “a near Sputnik moment,” referring to the 1957 Soviet launch into orbit of a satellite. The United States has been working on hypersonic technology, including models using scramjet technology, for decades. But Milley’s remarks seemed to suggest that American hypersonic technology is way behind that which China demonstrated.

A Piper PA-28 made an emergency landing on a highway in Buttonville, Ontario, Canada, on Thursday, after experiencing a power loss. Video shows the plane apparently avoiding a high overpass and wires to dop down and land with the flow of traffic. There were no injuries or automobiles damaged, and while the Piper four-seater seemed to have incurred some damage to its left wing, as it hugged the concrete center divider on its impromptu landing, later photos showed that it had not. Some pretty great aviating there.

Some early Cessna 182s are now okayed for Garmin’s GFC500 digital autopilot. The original 182, plus models A-D are now eligible. The GFC500, according to Garmin, “integrates with Garmin’s GI 275 or G5 instruments; a combination of either a standby GI 275 or G5 electronic flight instrument interfaced to a G500 TXi™ flight display; or a G3X Touch™ flight display.” Previous approvals gave 182s from Models E-T GFC500 approval, and Garmin added that some 182s can now add yaw damper capability, as well.

Alaska Air is getting behind the development of a powerful hydrogen electric motor developed by ZeroAvia. The new propulsion system series, ZeroAvia says, will put out the equivalent of between 2,600-hp to 5,700-hp of power, allowing it to power even regional aircraft now equipped with turboprops. The De Havilland Q400 appears to be Alaska’s primary interest, with a goal of the future electric-hydrogen motor equipped aircraft to be able to ply 500 nm routes with a full passenger load of 76 aboard.

A Cessna 150 that had gone missing on a trip from southern Oregon to Northern California, was located and its sole occupant, a 71-year-old California man, suffered fatal injuries in the crash into a mountainous and heavily forested area. The pilot had reportedly used his cell phone to contact police before the crash, reporting he needed to make an emergency landing.

Jon Hakala took top honors in the first-timer category at the STOL Drag contest at the High Sierra Fly-In earlier this month flying a Zenith STOL CH 701 nosegear-equipped Kitbuilt plane powered by a Rotax 912 ULS engine. Hakala, 25, who bought the plane used, had never competed in a STOL event before. He flew the round trip to Dead Cow Dry Lake in the 701, a journey that took around five and a half hours each way. Congrats, Jon!

The Great State of Ohio, which claims the Brothers Wright as native sons, got a failing grade on its new license plate design when artists put the canard (tail in front) configuration backwards in its graphic. In a classic case of internet schadenfreude, pilots from around the world pointed out the wrong-way Flyer gaff, with one commenter warning, “Heads up, Orville! You’re about to fly into a giant ribbon!” The State produced tens of thousands of the plates, most of which will be recycled. If any made it into private hands, we totally want one!

GE has won a handful of contracts from NASA to develop a compact engine core for next-gen airliners. GE will push the limits of existing development already in its wheelhouse in developing smaller parts with tighter tolerances and other components using new coatings technologies, such as ceramics, to increase engine efficiency to previously unattainably low levels of emissions and generation of power. NASA hopes to be able to show off the fruits of this research, with GE and with others, by 2026.