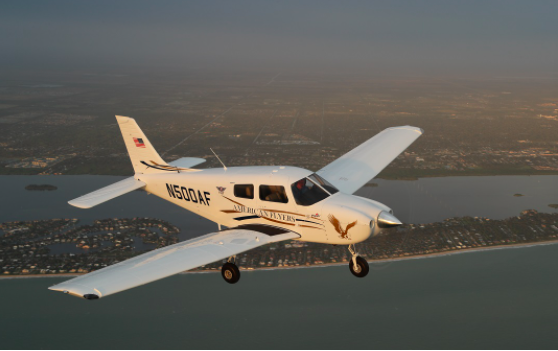 When Florida-based aircraft maker Piper showed up in Lakeland on Monday, it had four of its current-production aircraft in tow (or the other way around, maybe). The stories behind are cool, and they underscore not only the successes Piper is experiencing now but its past triumphs, as well.

The biggest news behind Piper is probably that its long-time President, the popular Simon Caldecott, has retired, and there’s a new guy in charge, John Colcagno. Well, not really a new guy—he’s been there for 11 years, but new to the role. And according to our inside sources in Vero Beach, he’s really excited for the opportunities the company has in front of it.

But airplane wise, here’s the scoop. There are four at the show—an Archer, a Piper Pilot 100, a Seminole and an M600.

As you might have read, flight training organization ATP inked a deal with Piper recently for 25 trainers for its expanding flight training ops. The first of those 25 planes is none other than the PA-28 there in Lakeland. That Archer will be turned over to ATP after Sun ’n Fun and it will get to work, which is exactly what it’s meant to do. The order for 25 trainers is part of a larger, 100-airplane deal worth $37 million, says Piper.

The M600 is the company’s current demonstrator, both as an M600, a former Plane & Pilot Plane of the Year winner, and as the HALO demonstrator. HALO is Piper’s excellent implementation of Garmin’s award-winning Autoland utility, which can automatically land the plane on a safe runway and bring it to a stop in the case of pilot incapacitation. The M600 on the line also represents a new styling package for Piper, with a very cool blackout exterior.

Though Piper hadn’t realized it until after the Seminole rolled off the line, the PA-44 is the 1,000th Seminole. With its first delivery in 1979, the PA-44 has proven a popular twin-engine training platform for more than 40 years.

Finally, the other PA-28 on the line is a Piper Pilot 100i, one of the eight aircraft ordered by Amerian Flyers, represents a rare bird. Piper sales and marketing VP Ron Gunnarson says that the model is backlogged through 2021 and into the following year.  The Pilot 100i features a 180 hp Lycoming IO-360-B4A and Garmin G3X flat-panel avionics.