May 22, 2021 admin No Comments
Advertisement

Our Photo of the Week this week is by Reddit user u/thatsnasty89, who spotted this scary WX hazard while in the pattern. His decision, reportedly, was not to fly through it. For the uninitiated, that is, those who don’t live in the desert southwest, this is a classic dust devil, the largest of which can be bigger than the smallest tornados. Some get big enough to do real damage. Paragliders are very wisely, deathly afraid of dust devils, but even fixed-wing planes should take pains to avoid them. Dust devils aren’t associated with storm systems the way tornados are. Unlike their more destructive swirling-cloud cousins, dust devils come from strong updrafts that form most often over hot, flat surfaces. The desert is ground zero for these guys. This one isn’t as big as they get, but it’s a big one. Some grow to taller than 500 feet in height, pulling up dust and debris and creating a super-spinning cloud of sandpaper in the process. We’ve seen airport ramps littered with dust and tumble weeds after a duster passes. Thanks to the original Reddit poster for this amazing pic! 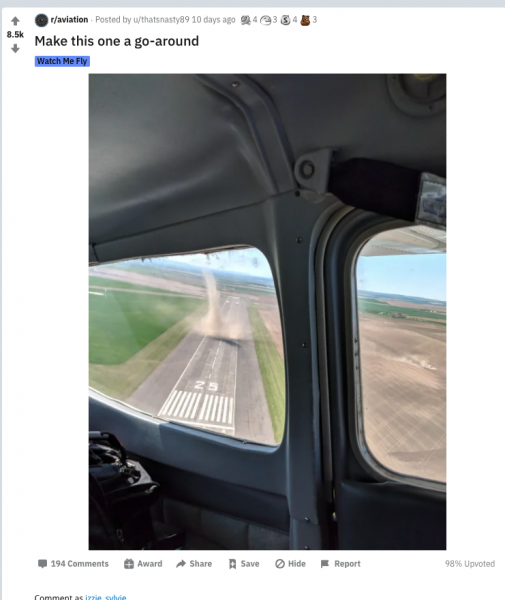