Tag: how to move a sketch to a different plane in nx

How To Transition To A Different Plane 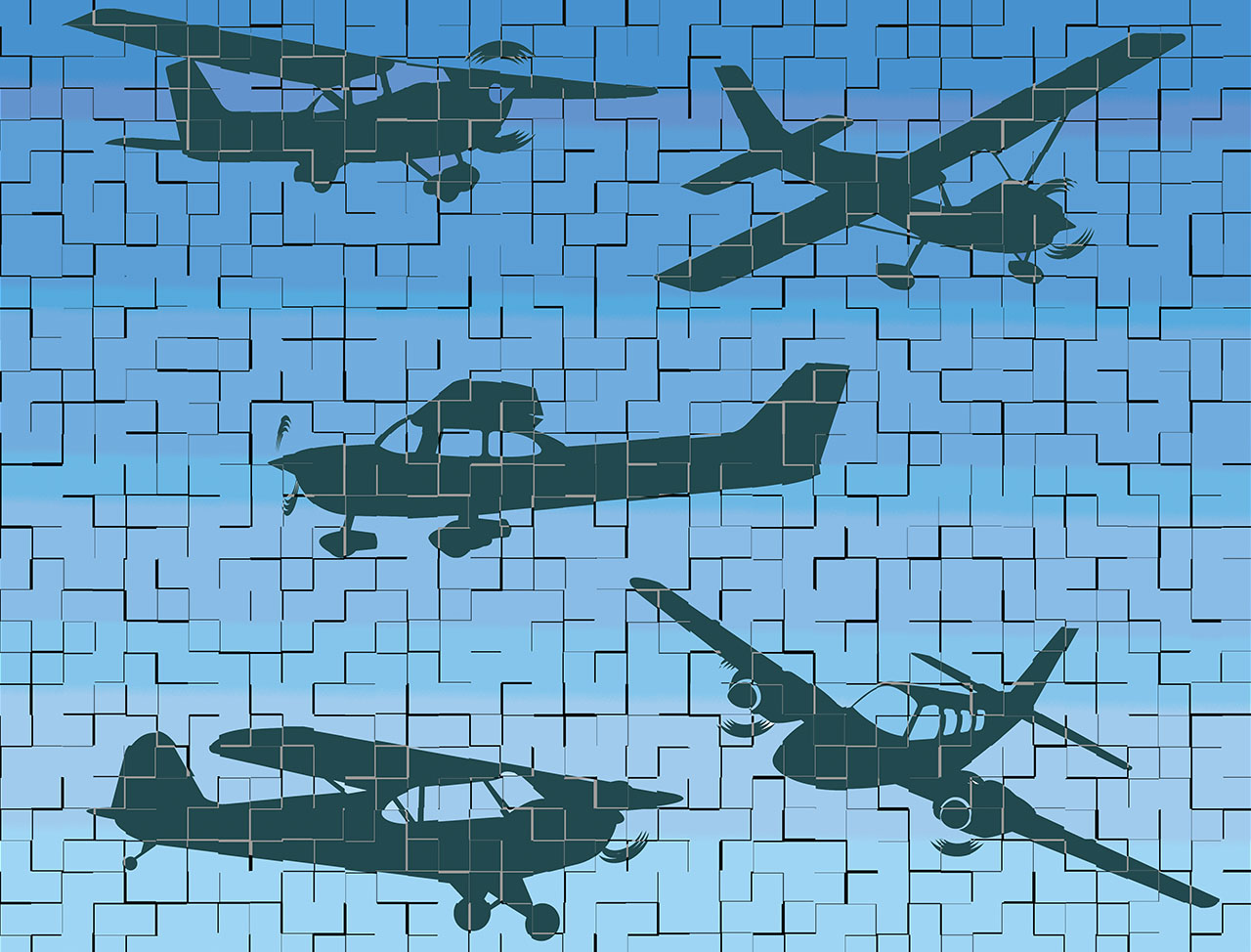 We’ve all heard airport braggarts say “Aw, if you’ve flown one, you’ve flown ‘em all.” But is that really true, the idea that all airplanes are basically the same?

Not really. Getting out of one airplane and settling into another can be, in fact, a bit of a shock. While it is certainly true that all airplanes are, in essence, similar horses under different colors of hair, and they all need the same things to fly—power, attitude and energy management—they do vary widely in capability, feel and response. It takes more than a little transition time to achieve proficiency when switching among airplane types.

Further adding to the pitfalls of swapping cockpits is the challenge of mastering the avionics setup. Gone are the days when one set of gauges and radios operated pretty much like all the others. Not only does one have to contend with differing brands of avionic suites and their peculiar operating logic, but also many GPS and multifunction displays are customizable, so you’re dealing with the settings and defaults that have been selected by the owner or the previous pilot. Even if you knew your way around your own cockpit, saddling up a borrowed mount, even one of the same basic type, is likely to be subtly, or not so subtly, different.

How, then, can we do this safely?

Preparation is key. The logical first step is to dig out the manuals and operating limitations for the upcoming aircraft in whatever form they are furnished and read them from start to finish. Make notes as you go and organize those notes in operational checklist fashion. Look for limitations, V-speeds, cautions and warnings. If possible, sit in the airplane while you read the documents, where you can observe and touch the relevant items. Learn as much as possible about the aircraft before you approach it to fly—most particularly the fuel system.

The second most important step is to avail yourself of tribal knowledge. Talk with people who’ve flown the exact same airplane, or as close to it as you can get. They can tell you what to watch for, what not to do and what the real expectations should be. Respect their hard-won experience.

Then, get all the mentoring you can. Find a knowledgeable instructor/pilot to ride along, with emphasis on the knowledgeable part. It’s better to have the help of a non-CFI who’s well acquainted with the aircraft than a person with an instructor’s certificate but no experience in type. Understand, however, that pilots who’ve never occupied the right seat as a teacher may be nervous letting you wobble and swerve while you’re feeling out the machine. CFIs are used to tolerating a few initial foibles, and their experience as instructors can help them assess your capability in short order.

Type-specific training is the gold standard, if available. If you’re about to tackle a new-to-you homebuilt, find an instructor holding a Letter of Deviation Authority (LODA) for that type of kit, which permits him or her to offer instruction in a specific type of amateur-built aircraft. If none are available, get some time in an airplane that’s as close to the subject Experimental Amateur-Built aircraft as you can.

“Never, ever launch into weather or busy airspace unless you know exactly what is or isn’t working in your cockpit, and you are fully schooled in how to make it work.”

Completing a type-specific course is not the goal; becoming comfortable with the plane and its avionics suite is what we’re after, and that will take some time. In the case of moving up to higher-performance airplanes, the insurance company’s stipulations, and common sense, may require additional hours with a mentor pilot or even a CFI following the initial schooling, critiquing your every move. As you get ready to move out on your own, set your initial limitations high and work down in careful steps.

This can mean flying mostly in day-VFR conditions at first; if flying IFR, look for forecasts of weather that’s good enough to facilitate a visual approach. If a few easy trips go well, and your capability with the avionics is free of surprises, you may begin to accept 800-and-two arrivals, then 500-and-one if you feel up to it. Avoid 200-and-one-half weather until you’re thoroughly satisfied with your performance in the strange cockpit…if ever.

Transitioning is about more than learning checklist procedures. It starts with understanding the systems behind the procedures, learning why different manufacturers do things in different ways. Operation of fuel-boost pumps, for instance, differs among engine and airframe types. Checklists for Continental piston engines usually don’t call for pumps “on” for takeoff, unless that selection is a “low” vapor-purge setting that automatically switches to “high” if an engine-driven pump goes out. An overly rich condition can result if the correct procedure is not followed. Lycoming engines, on the other hand, mostly call for aux pumps “on” for takeoff and landing—but not always. Know the airplane and use the checklists.

Don’t rush the transition, even if you feel it’s going to be a no-brainer to move into just another airplane. At my home airport, a highly experienced pilot recently jumped into an unfamiliar PT6A-powered aircraft to reposition it on a short ferry flight. The plane had been sitting outside for a while, and before going into storage, it had been running fine. But his attempt to start didn’t get very far. The pilot, who had just become the new owner, neglected to drain the fuel sumps, among other things. Naturally, there was water waiting to plug the fuel filters, and when he tried to fire it up, he found that he wasn’t going anywhere.

As I’ve said before, avionics setups are one of the biggest bug-a-boos to be faced when first flying a new plane. We’ve all had trouble getting communication radios to work because the audio panel switches were not set right. When several frequencies are lit up on the dashboard, make sure you know which one is actually the active one awaiting your microphone button.

Want some real complication? I’ve encountered airplanes in which a newer panel-mounted radio was installed while the old custom-installed remote gear was still being carried around, its switching panel remaining in place but not operational. Never, ever launch into weather or busy airspace unless you know exactly what is or isn’t working in your cockpit and you are fully schooled in how to make it work.

How about if there’s only one seat in the airplane? All of the above recommendations apply, only more so. Caution is the key to survival, expanding the operating envelope carefully since you’re entirely on your own.

Talk with those who’ve flown the airplane before you, sit in the cockpit for a good long while, and read everything available. Feel out the aircraft during taxi and during a cautious takeoff, and do nothing while close to the ground. Get up to a good healthy altitude and work through the systems and configuration changes, particularly the handling in landing configuration. Make the first landing on a long, wide runway and stay alert throughout the process. After that, you can say “piece of cake” if you want.

“Switching seats sounds simple, but if you ever have the itch to play CFI and fly from the right seat, be prepared for humiliation.”

Does it get easier to move among different airplanes if you’ve done it a few times? Yes, just because you will have acquired some survival skills that protect you from assuming too much, too quickly. There’s no doubt that basic stick-and-rudder ability is honed by flying different types of aircraft. When I first flew a seaplane, I was amazed at how closely the takeoff and landing attitude management resembled what I had learned earlier during glider flying. In most gliders, one balances on a single wheel, located under or just aft of the cockpit, and that’s about where the “sweet spot” of a hull or float will be found when you’re planing on the step. Keeping the nose attitude just right to avoid “digging in” applies in both cases.

Similarly, a light helicopter’s cyclic stick has to be moved gingerly, with one’s forearm resting on the right leg to facilitate small inputs with the fingertips. And that same light touch will be required when you attempt to fly a sensitive, close-coupled, high-performance homebuilt airplane; its stick will also need a damped, relaxed-arm position, much like you use in a helicopter.

We can also find some transference when stepping into an antique or classic airplane, after having flown an aircraft type designed in a similar era. Have you ever flown an airplane with no wing flaps, like a Champ or Cub? If so, you’ll know that excess altitude on a landing approach requires a slip to avoid a go-around, and if you’re stepping into a Porterfield or Interstate, you’ll find a certain amount of commonality. These older airplanes usually need considerable rudder input to coordinate turns, given the early aileron designs.

If you’ve never flown behind a radial engine, you’re going to need some basic instruction in its starting and handling. Yes, it’s just another airplane once the round engine is running, but the perspective from a cockpit obscured by a bulging circle of cylinders takes some getting used to. Similarly, a biplane of any type is good training for any other airplane with a stacked pair of wings. One quickly learns that employing a bit of a slipping approach uncovers the runway hiding behind the lower wing.

We can’t stress too much the need to get transition training in an aircraft that’s as close of an approximation as possible to the airplane you’re attempting to fly. If you’re going to tackle a single-seat Pitts aerobatic machine, find a CFI with a two-holer Pitts S-2 to give you some dual. Don’t fly an RV-3 homebuilt without first getting pointers in an RV-4 two-seater.

Oddly enough, there can be an adjustment period when you first move from high-wing to low-wing, or vice-versa. If all you’ve ever flown is a shady Cessna, the brightly lit exposure of a Piper Cherokee cockpit is a bit of a shock. And when you give up your secure low-wing configuration and look out the window from under a high wing, you’ll feel positively exposed at first. Not to worry; it just takes some practice and getting used to.

Switching seats sounds simple, but if you ever have the itch to play CFI and fly from the right seat, be prepared for humiliation. There are ingrained habits formed from sitting on the left side of a cockpit, using the left hand to manipulate controls while pushing throttle with the right, that just won’t go away when you sit on the other side. When teaching would-be instructors, I tell them to expect 10 hours of transition time before they can perform to an equivalent level of skill in the right seat. In the meantime, you’ll need an instructor in the left seat to bail you out from embarrassment.

Never, ever say, “Oh, I’ve flown one similar to this before, this’ll be easy.” Do your homework and seek counsel, no matter how familiar the airplane and radio setup. A Beech Bonanza G35 is quite unlike the subsequent H35 or a 20-year-newer V35B, even though they all have V-tails. A Baron 95-55 and Baron 56TC are both built under type certificate number TC3A16, but they’re vastly different machines. The Cirrus series of integrated-cockpit airplanes and avionics require considerable rethinking if you move from early-generation to G5 configurations.

Transitioning between cockpits can be subtle or extreme when determining the amount of training and time it will take. But always do the preparation and learning needed, and keep your limitations sacrosanct, no matter how much pressure you feel to perform.