Tag: Photo Of The Week

Image of the Week: Cowboy Campfire with Super Cruiser

This week’s Plane & Pilot Image of the Week is from pilot/photographer Marc Davis, that caught this exceptional photo of his Piper PA-12 Super Cruiser( try to find our cover tale on the enter the September problem of Plane & Pilot)near Prineville, Oregon. Davis informed Plane & Pilot, “It was a moonless evening with a welcome light wind blowing. The day had actually been warm, yet the high hill air cools down promptly. I appreciated a tiny fire and also reviewed the very first large outing with my’ brand-new’ airplane. As the sunlight collection, a pair packs of

prairie wolves began vocal singing in stereo. “Concerning that”brand-new aircraft.” Davis had just lately acquired the 1946 Piper Super Cruiser, he claimed, from an insurance policy public auction. The aircraft had actually been turned in a touchdown problem, as well as there was a great deal of damages. Davis needed to mount a brand-new windscreen, shows off, tail as well as prop, to name a few elements. Seizing the day, he additionally performed a considerable”examination as well as a fixing to the remainder of the airframe and also engine.”Davis stated that the aircraft flaunts greater than 30 STCs as well as area authorizations. To obtain the shots, yes, plural, the digital photographer made use of an”11-year-old D5100″and also a Nikkor 35mm F1.8 lens. The skies component of

the composite picture”is a pile of 30 photos making use of Deep Sky Stacker.”The foreground shot, he stated, is a much less complex solitary shot made with the very same gear. He after that sewed them with each other in Photoshop. Completion outcome is absolutely nothing except amazing. Many thanks for allowing us share it, Marc! Promotion Enjoy recently’s Photo of the Week, “Skywagon Heaven” right here.

Image of the Week: Skywagon Heaven

1200w, https://getyourpilotslicense.org/wp-content/uploads/2022/07/photo-of-the-week-skywagon-heaven-5.png 600w, https://getyourpilotslicense.org/wp-content/uploads/2022/07/photo-of-the-week-skywagon-heaven-6.png 1000w, https://getyourpilotslicense.org/wp-content/uploads/2022/07/photo-of-the-week-skywagon-heaven-1.png 1280w”dimensions=”( max-width: 640px) 100vw, 640px” > This week’s Plane & Pilot Picture of the Week is from Casey Long, that caught this impressive picture of his stunning 1979 Cessna 185f Skywagon on the glazed surface area of Shirley Lake, Alaska, doing its finest impact right here of a showing fish pond. The lodge called the LoliOli Lodge is located in the Alaska Range. Yeah, we absolutely wish to go, as well! And also numerous thanks for the incredible photo, Casey! Sight recently’s Photo of the Week,”Timeless Cub,”below.

Photo Of The Week: Timeless Cub

This week’s Plane & Pilot Photo of the Week is from our first Your Flying World Photo Contest. We chose it for this week because, amidst an airline world in disarray, the shot evokes a sense of beauty and peace that remains for many of us the driving force behind our love for flying. The gorgeous shot by Robbie Culver is of a Piper J-3 moving fast (as fast as a Cub can, anyways) on the runway, the lens blur perfectly capturing the sense of motion and drama. Thanks again for the great shot, Robbie, and for connecting us with the most beautiful parts of the thing we love.

from our latest Plane & Pilot picture competition. Richard King recorded this fantastic shot of the North American P-51″Cripes A’ Mighty” near Red Mountain, Arizona at sundown. King, that began contending the age of 12, when he was enthralled by an airshow in his indigenous England. For his winning access, King got $ 500, a Sony mirrorless webcam, Bose sound sunglasses, a David Clark headset as well as a lot more. Locate our image competition victors and also finalists online.

Field Past the Bend

This week’s Plane & Pilot Image of the Week is thanks to backcountry lobbyist Kevin Quinn. A severe fisheye shot that knocks senseless the device of the cam install, the screen-grab picture reveals Quinn transforming last in his attractive yellow Stearman. The”airport terminal,” he stated, is the huge eco-friendly field simply past the bend in the river. A better flight terminal we’ve never ever seen. As well as many thanks for the share, Kevin! Wish to see even more of our Photos of the Week? Take a look at”Achoo At 12 O’Clock Low.”

This week’s spectacular Plane & Pilot Photo of the Week is from Leigh Hubner, who snapped this shot of his family’s Cessna 195 at the South Carolina Triple Tree Aerodrome annual fall fly-in. The weather for the event was gorgeous, and lots of airplanes showed up for the festivities. The airport, which features a grass runway that Hubner compares to a fairway at the Augusta Masters Golf Course, saw a whopping 1,349 operations, according to the organizers. They add that the really important part is all the new friends they got to make. 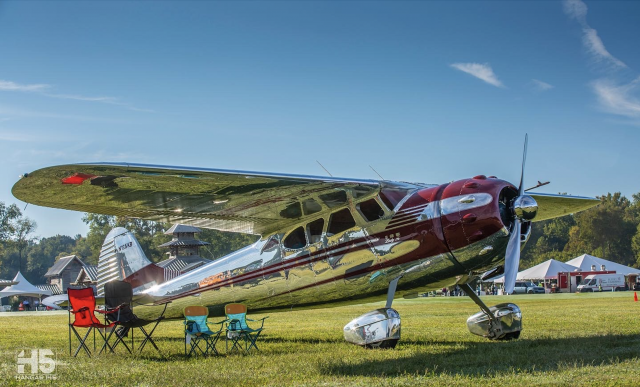 Miss last week’s Photo Of The Week? Check it out: A Photo Contest Beauty From Brent Clark

Here are five of the coolest photos taken by our ace photographers, Jim Koepnick and Art Eichmann, at this year’s EAA Oshkosh AirVenture fly-in. The images were ones that made our jaws drop (at least a little) when we first clicked to open them. There were so many amazing moments this dynamic duo captured at the world’s biggest and best airshow, so this is, if you will, a snapshot of their work during a week that those who attended will never forget. And don’t forget to look for our October issue, which will feature a look back at #OSH21 with big spread of their best work. 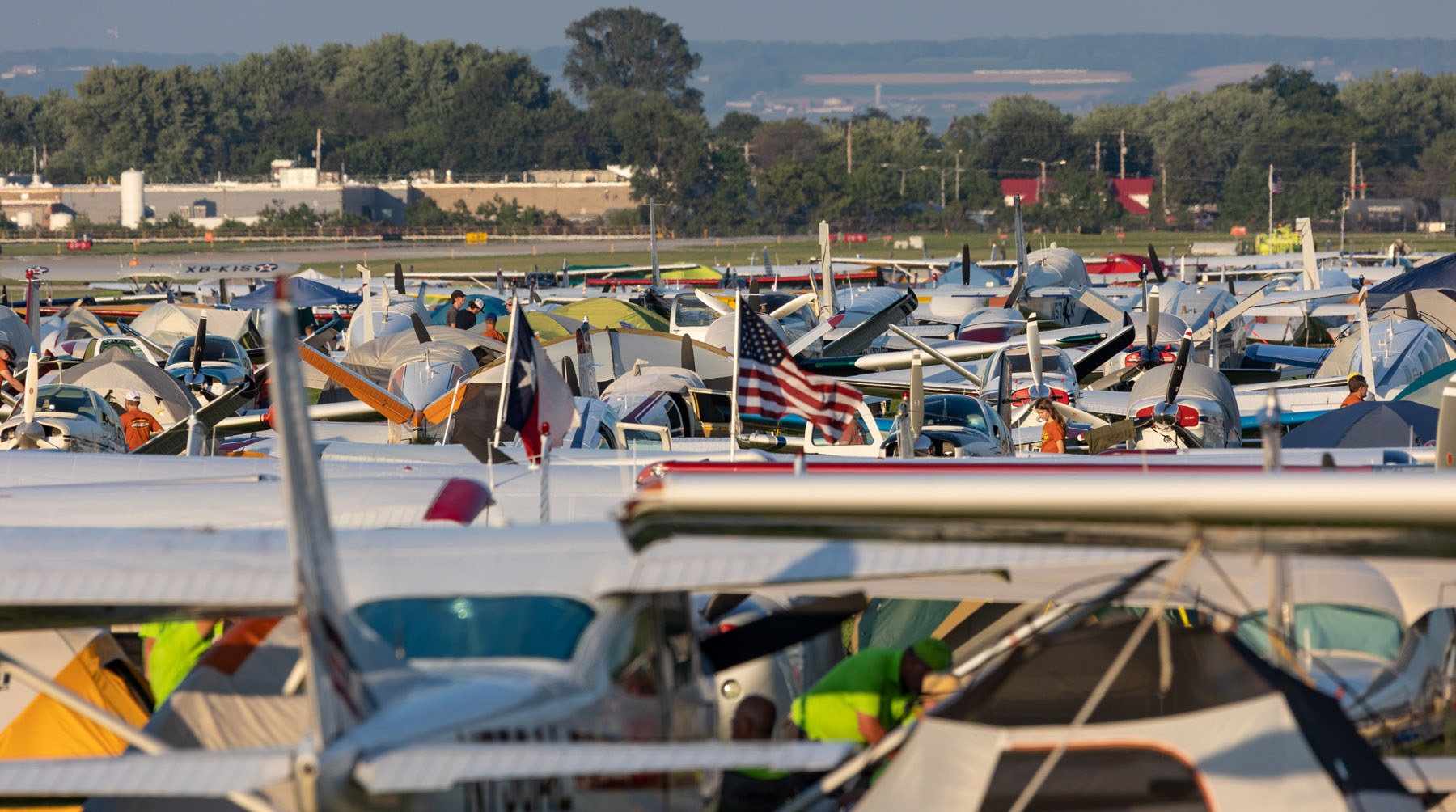 Jet Noise And Smiles On Tuesday As Weather Starts to Turn

This Week’s Plane & Pilot Photo of the Week is from Brian Uretsky, a Dallas-area pilot who often gets routed over the top of DFW when he’s heading on a local flight in his trusted Cherokee 140. Uretsky, who started his flying journey only in 2019, has 700 hours already and has tacked on multi-engine, commercial and instrument privileges to his ticket in that time. He’s a talented photographer period. Check out Brian’s Instagram page, @uretskyaviation.

The photos, taken from almost exactly the same spot and altitude, speak for themselves. The top one, taken in September of 2020 when the pandemic was raging, shows a few planes parked and a whole lot of empty gates. The second shot, taken earlier this month, shows the remarkable recovery that commercial aviation has achieved in an astonishingly short period of time.

Thanks for the great shots, Brian!