Tell Me About This Photo

I FOUND THIS picture on the Interwebs. It’s an aerial shot of Boston-Logan, my hometown airport. Judging from the liveries and aircraft types, I’d put the date at 1986, give or take a year.

What a time capsule. We see USAir’s red tails; a United DC-8; a pair of Piedmont 727s; a Delta TriStar; a United DC-8. And most obvious, maybe, is the old terminal A, home to Eastern Airlines. Three of the carrier’s Airbus A300s, which it used on Shuttle routes to La Guardia, are visible. You can’t make it out through the shadows, but the latticed façade and five-story archways of this building bore a likeness to the lower curtain wall of the World Trade Center in Manhattan — and not by accident, for both were the work of architect Minoru Yamasaki. And, standing sentry, there’s Logan’s unmistakable control tower. The 16th floor observation deck would still have been open.

But something else really jumps out at me. And it’s not something we can see. It’s something we don’t see. I want you to study the picture and tell me what’s not there. Air travel in 2022 is quite different from air travel in the 1980s, and a big reason for this difference is the thing missing from this photograph. What is it?

The answer appears on the next line. See if you can figure it out before scrolling. 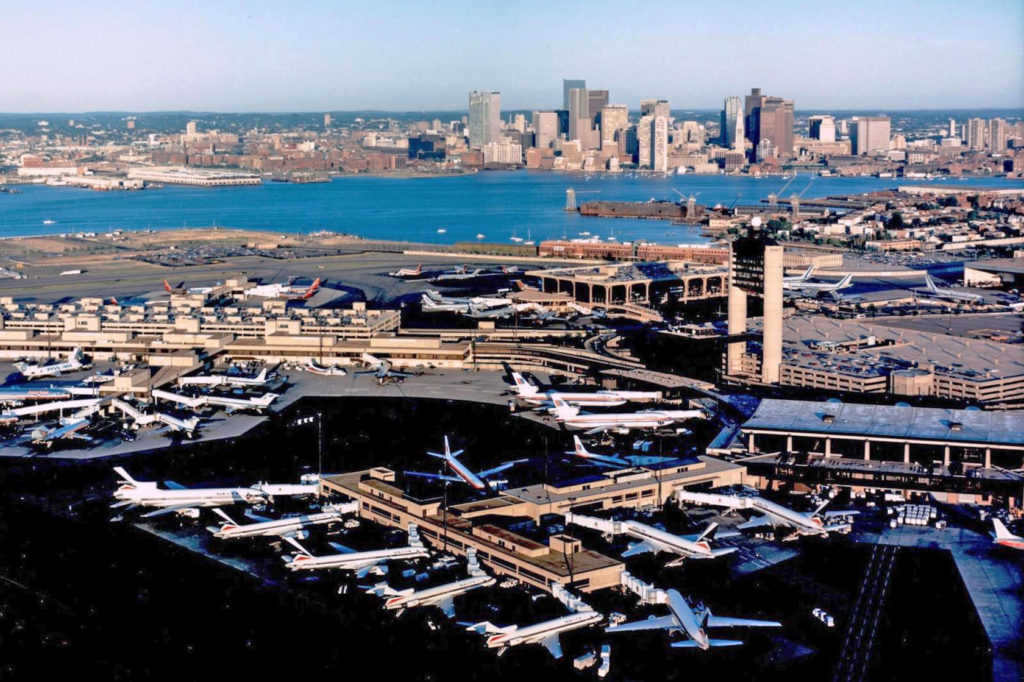 What I’m talking about is the complete absence of regional jets.

No Expresses, no Connections, no Eagles, and so forth. No Canadairs or Embraers. Every single jet in the picture is a mainline jet. This was before the introduction of RJs, at which point the big airlines began the widespread outsourcing of their routes to small-jet contractors.

Small jets did exist in the 1980s (the F-28 for instance), but they burned a lot of fuel and had very high seat-mile costs. It wasn’t until the advent of more efficient planes like the CRJ-200 and the early Embraers that domestic codesharing really took off. By the early 2000s, depending on the airport, forty percent or more of the planes in a photo like this would be regional jets. Love them or hate them, RJs are everywhere.

Many travelers don’t realize it, but the majority of regional airlines have a livery-only affixation with their legacy carrier partners. Some are wholly or partly owned by a major; others are completely independent, but either way they are separate entities, with their own employee groups, pay scales, management structures, and separate FAA operating certificates. (There’s more about this, if you’re interested, in chapter four of my book.)

The term “regional airline” has always been around, but in the old days it meant something different. A “regional” was a major airline whose network concentrated in a particular part of the country. Ozark Airlines, for instance. Or Southern Airways. What today we think of as a regional was called a “commuter.” Commuters fed the majors’ hubs from outlying cities, using turboprops almost exclusively. Look closely at the photo and you can see a couple of turboprop planes. One of them is a Command Airways ATR-42. An independent commuter at the time, Command later became an American Eagle franchise.

The first airline I worked for was a commuter. This was the very early 1990s; maybe we were calling them regionals by then? Our planes flew under the banner of Northwest Airlink, a feeder into Northwest’s Boston hub. We had 15-seaters, 19-seaters, and later a handful 37-seaters. All props. Our network spoked out to places like Burlington, Bangor, Albany, down to Virginia and up into the Canadian Maritimes.

The balance has begun to swing back of late, with the majors taking over a bigger and bigger percentage of routes and frequencies. Driven in part by the pilot shortage, which has forced regional airlines to offer better salaries and working conditions, the cost advantage of RJs has diminished somewhat. For the time being, however, they still comprise a healthy chunk of our flying.

PLANES, PRANKS AND PRAISE: ODE TO AN AIRPORT
THE SHUTTLE SHUFFLE
POLYESTER, PROPELLERS, AND OTHER MEMORIES
LOOKING OUT: OBSERVATION DECKS, THEN AND NOW