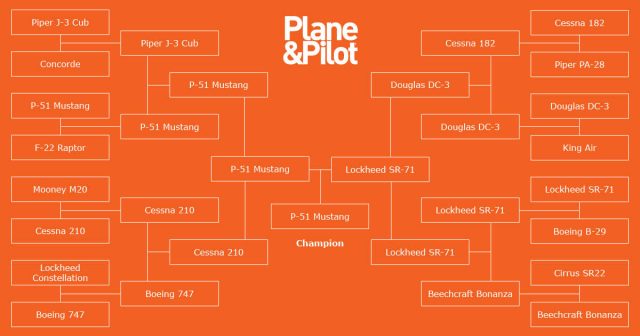 After winning all the marbles in the NCAA College Basketball Championships, it’s customary for the newly crowned champs to cut down the nets as a trophy, something the winner of our contest, the Best Plane Bracket, would be very good at, what with its huge prop and powerful V-12 engine. Yes, that’s right. Our winner was none other than the venerable North American P-51 Mustang. Congrats to all of its fans.

It was far from a runaway though. The Mustang had some stiff competition from a few very different kinds of airplanes, but when it came down to crunch time, the P-51 outdistanced the Lockheed SR-71 in the championship.

Other strong performers included the Cessna 210 and 182, the Douglas DC-3 and the Beechcraft Bonanza. Thanks to all who participated!