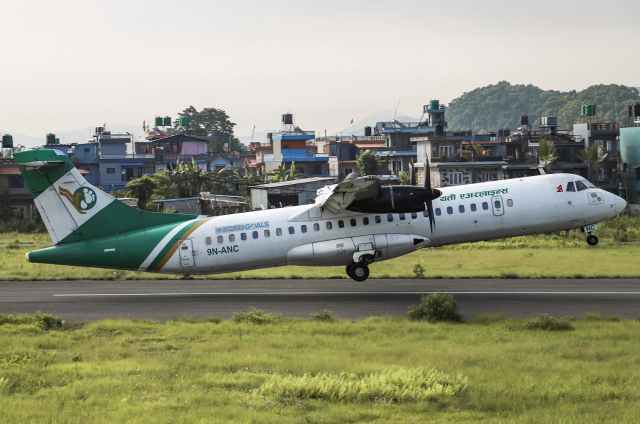 Mystery surrounds the crash of a Yeti Airlines ATR-72 in Nepal on Sunday, killing all 72 crew and passengers aboard the twin-engine turboprop plane. Two videos appeared shortly after the crash, one taken by a resident near the site of the crash and another a Facebook livestream taken from inside the plane’s cabin. The flight had originated in Kathmandu and was headed to Pokhara, a 30-minute flight. Pokhara is the gateway to the Himalayas and a popular trekking jumping-off point. The weather looked a little hazy but otherwise excellent, and from the video taken by the Pokhara resident, the wind didn’t appear to be a factor.

That ground-perspective video below, which stops just as the ATR is dropping a wing and before it spirals out of control, shows the regional airliner clearly flying very slowly before disappearing behind a structure. At that point, its bank angle was greater than 90 degrees, meaning it was on its way to being inverted.

Horrifying last moments of an ATR plane crash from Nepal in Pokhara that was bound for Kathmandu. All 72 people on board are dead. pic.twitter.com/4JZIvnThPQ

The video from the cabin, likewise, shows the plane at an unusually high angle of attack as it is flown slowly for some reason. After watching the videos, a former NTSB official remarked that the plane’s wing flaps didn’t appear to be fully extended on the airliner and that the engines, or at least one of them, appeared to be functioning. Twin-engine commercial planes like the ATR 72 are fully capable of all phases of flight even with one engine not producing power. If the flaps had not been fully extended, that would have raised the minimum speed at which the plane would still be controllable. It appears from the video that the plane did indeed go out of control, seemingly from being flown too slowly. Airline pilots are trained to be rigorous in their attention to the plane’s configuration (such as flap settings) and its airspeed. The cabin video goes all the way into the crash, and the passengers, all of whom would die in the crash, seemed unaware until the very last seconds that they were in trouble.

The plane crashed in a steep ravine near the new Pokhara Airport, which opened just a few weeks ago. It is not clear how flying into a new and therefore somewhat unfamiliar airport might have affected the flight, though investigators will surely be looking into that factor.

All 72 bodies have been recovered, as were the flight recorders, which might provide answers. In most cases, the cockpit voice recorder holds few clues, but this case feels very different than most.

There are conflicting reports about the seat that Khatiwada was occupying on Sunday’s flight, though some outlets have reported that she was flying with a check pilot before earning qualification to fly as captain of the ATR 72. If that were the case, the qualification process might hold clues as to why the plane went out of control, though standard procedures would call for the flight to be flown by the book regardless of the nature of the crew. Khatiwada earned her ratings in the United States and had more than 6,000 hours of flight experience, reportedly being qualified already as captain on other aircraft in the Yeti Airlines fleet.