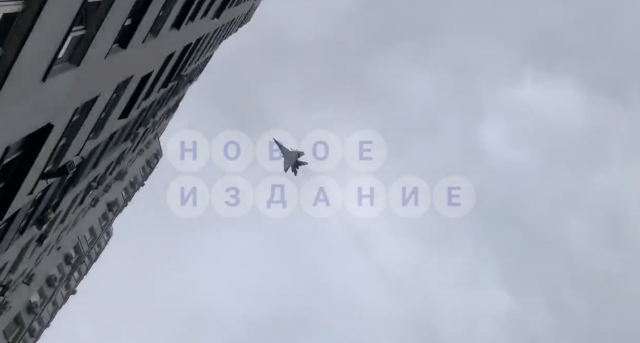 An unnamed Ukrainian fighter pilot shot down six invading Russian planes on Thursday, becoming an ace in a matter of hours. The pilot’s identity is being protected, for fear of reprisals should they fall into Russian hands. Sources say that they have shot down two Sukhoi Su-35s, two Sukhoi Su-25s, a Sukhoi Su-27 and an enemy МіG-29.  The short video shows a Ukrainian MiG-29 flying at low level over the city of Kyiv. The pilot is reportedly called the “Ghost of Kyiv.”

The MiG-29 the Ghost of Kyiv is flying is a Russian-made fighter jet, one of the most capable in the world. It emerged from the Soviet Union in the early 1980s and is still in production with more than 1,500 built. After the dissolution of the U.S.S.R., Ukraine had hundreds of MiGs abandoned within its borders, though it operates a relatively small number of them. The planes are very capable, as evidenced by the Ghost of Kyiv’s success against the Russian intruders. The twin-engine jet was originally intended as an air superiority fighter, though over the 40 years that it has been in service, its role has expanded into that of a multi-role aircraft. It is capable of top speed of Mach 2.25 and is heavily armed with rockets and air-to-air missiles. It’s also capable of carrying up to six 1,500-lb. bombs.

The aircraft the Ghost of Kyiv has shot down are mostly frontline Russian fighters, including the Sukhoi Su-35, which is a highly maneuverable twin-engine, single-seat fighter.

There is reportedly a Ukrainian fighter pilot who has taken out 6 Russian jets in air to air combat. He is being called the “Ghost of Kyiv”pic.twitter.com/zCdK2URsHM