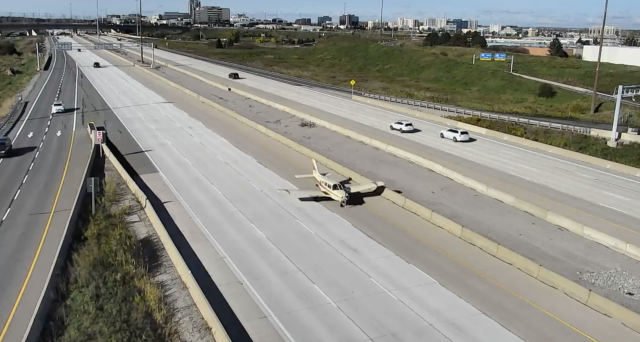 No one was injured late Wednesday morning, the pilot of a Piper PA-28 was forced to make an emergency landing on Highway 407 in Buttonville, Ontario, Canada, after the plane’s engine sputtered and then died shortly after takeoff. The PIC, flight instructor Ibrahim Kulom, aimed for the 407 because, he told a reporter from Toronto’s CityNews, that it was either that or “the buildings.”

The video is intriguing, in part because it’s so hard to see the Piper at first. It comes visibly into frame around the halfway point, and it’s impossible for us to make out how it managed to avoid a high overpass and power lines as Kulom headed for the highway. Traffic at that time of day on the 407 is typically very heavy, but the pilot caught a break when a big gap opened up, leaving a big opening for him to make a textbook landing. In the video, the plane’s left wingtip appears to be hitting the center divider, but in later photographs, after it was being loaded onto a flatbed for return to the airport (and an appointment for some engine work), there was no visible damage at all. Great flying, Ibrahim!

🎥 New footage from our CCTV cameras of the plane that made an emergency landing eastbound on 407 ETR just west of Woodbine this morning! The plane has been removed from the scene and our team is in the process of reopening all lanes. pic.twitter.com/DlSDZBTEoz