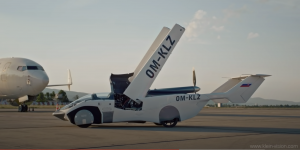 A Slovakian company has made a widely publicized flight complete with video of a flying car doing its thing, eventually landing in the capital city of Bratislava and then driving to the city center.

The Klein Vision AirCar is an actual flying car, unlike many flight-only vehicles tagged as such. Powered by a 160 hp BMW engine, the plane has a single fixed pitch pusher prop.

The company claimed that the flight cut 35 minutes off the normal drive time from the takeoff airport to the city, but it landed at Bratislava International Airport, and it’s not clear why any regular old airplane couldn’t have made the same flight, also presumably cutting 35 minutes off the commute.

Regardless, the AirCar looks as though it flies pretty well, despite its nose-high deck angle in cruise. And it looks like it drives pretty well, too, though we’re still not sure why a loaner or rental car at the airport wouldn’t be just as good…okay, way better. But it is a flying car.

Whatever you think about flying cars, undeniably, the coolest thing by far is the  way it  transforms from plane to car and back again, at the flip of a switch, folding and tucking wings and tail in a way that even Michael Bay would love (for non-Transformers nerds, he directed the first five Transformers films, which have, according to the internets, grossed $4.84 billion—with a B!—at the box office.