Words Aloft: Christmas In The Caribbean

Home How to Become a Pilot Words Aloft: Christmas In The Caribbean

At half-past midnight, we swept the power to idle and let the landing gear settle onto the 11,700-foot runway in Aguadilla, Puerto Rico. The landing was so-so. When on the backside of the clock, sometimes our finesse wears a little thin. Pulling the thrust levers well into the reverse range and braking moderately, we hoped to avoid a long taxi back to the gate. Aguadilla’s runway, while long, lacks turnoffs—if you don’t clear the runway at midfield, you’re going all the way to the end to turn off.

It had been a long night coming down the L-route from New York, and we were all too happy to call it a day. Above the din of the spooled engines and rattling noises of slowing under heavy reverse, an odd sound joined the din. One of our flight attendants, who had bid the trip to be home this specific moment, started playing his barrel drum, and every Spanish-speaking customer aboard joined in a rousing song. The captain looked at me with a raised eyebrow, wordlessly asking a question: “Trouble?”

A grin spread across my face. “Anything but.” I raised the flaps, then killed the radar and windshear detection system. I yawned, rubbed the growing stubble on my chin, and smiled. Christmas Eve was now 32 minutes old. “After landing checklist is complete,” and it wasn’t too early to tack on “Merry Christmas!” to the end.

In the back, my wife, Amy, caught the celebration on camera. Puerto Ricans are prone to loud applause after a landing, but the festive mood caught on and continued as we taxied to the gate, where everyone deplaned and walked down the ramp, many still humming the tune as they left with a smile. They were home for Christmas, and nobody could be mad about that.

Being junior at the airline, I was pretty much assured of working Christmas—and most other major holidays. There’s a little extra holiday pay, which never hurts, and I bid holiday schedules with an emphasis on my layover cities. Also, through the blessings and curses of nonrevenue travel, Amy was along, too, a tradition we’ve started because the words “I’ll be home for Christmas” continue on to the latter half of Bing Crosby’s lyric, “…if only in my dreams.”

When people ask my favorite overnight cities, I often shock them. The expected answers are often the popular tourist destinations we serve, and I do enjoy them. But my favorites are the out-of-the-way gems, and Aguadilla is every bit of that. Nestled in the northwest corner of Puerto Rico, Aguadilla’s airport was formerly Ramey Air Force Base, where military assets were deployed, only minutes’ flying time from Cuba. Most of the military presence is now but a memory, and the former base hospital is now a hotel with a 24-hour Denny’s, where I enjoy many of my holiday meals.

Nearby Surfer’s Beach provides a beautiful mix of waves, sand and cliffs, and a winding trail along the bluffs makes for a nice hike to seek out a quiet place to enjoy a book, soak up some sun or surf. A compact hammock, crammed into the corner of my bag, is a must-have for this overnight. As Amy and I picked our way along the cliffs, we collected some beautiful shells and gently returned the ones that had tiny hermit crabs curled inside. We played in the surf, carefully climbed some jagged stones and enjoyed a view that was second to none. Surrounded by white sands instead of snow, this was not so much a Crosby-style Christmas as it was Jimmy Buffett’s “Christmas in the Caribbean.”

Oceanside layovers are a great way to spend the holiday, but not all airline Christmases are as enchanting. During my first Christmas as an airline pilot, I was still in training with my regional airline and living in a La Quinta for the length of training. Many of my classmates met up in my hotel room, and we threw whatever food we had stockpiled onto the coffee table— a potluck of frozen lasagna, ramen noodles, canned chili and peanut butter sandwiches. While we were minding our pennies, we were all excited to be there, and the exuberance softened the pain of being away from home.

In the years that followed, I celebrated Christmas in Oklahoma City, Detroit, Greensboro, Savannah and Appleton, Wisconsin. I once rang in the new year sliding down an icy mountain in Charleston, West Virginia, the van driver seemingly trying out for the U.S. bobsled team. I generally tried to find the very best of the situation being away for the holidays, but sometimes it was tough.

The Motown Christmas was the toughest one, between miserably cold weather and most options for food being shut down. I stepped into a nearby casino, hoping to find a buffet, only to discover a low ceiling of cigarette smoke and a crowd of sad-looking folks. One of the flight attendants ended up being our rescuer after she asked the hotel manager where there was a microwave so she could heat up her tub of Easy Mac on Christmas Day. The manager refused to let her near the microwave, instead handing her a handful of vouchers for the hotel’s holiday buffet, an extravagance none of us had even dared consider. We ate well that night, but only out of sheer luck. 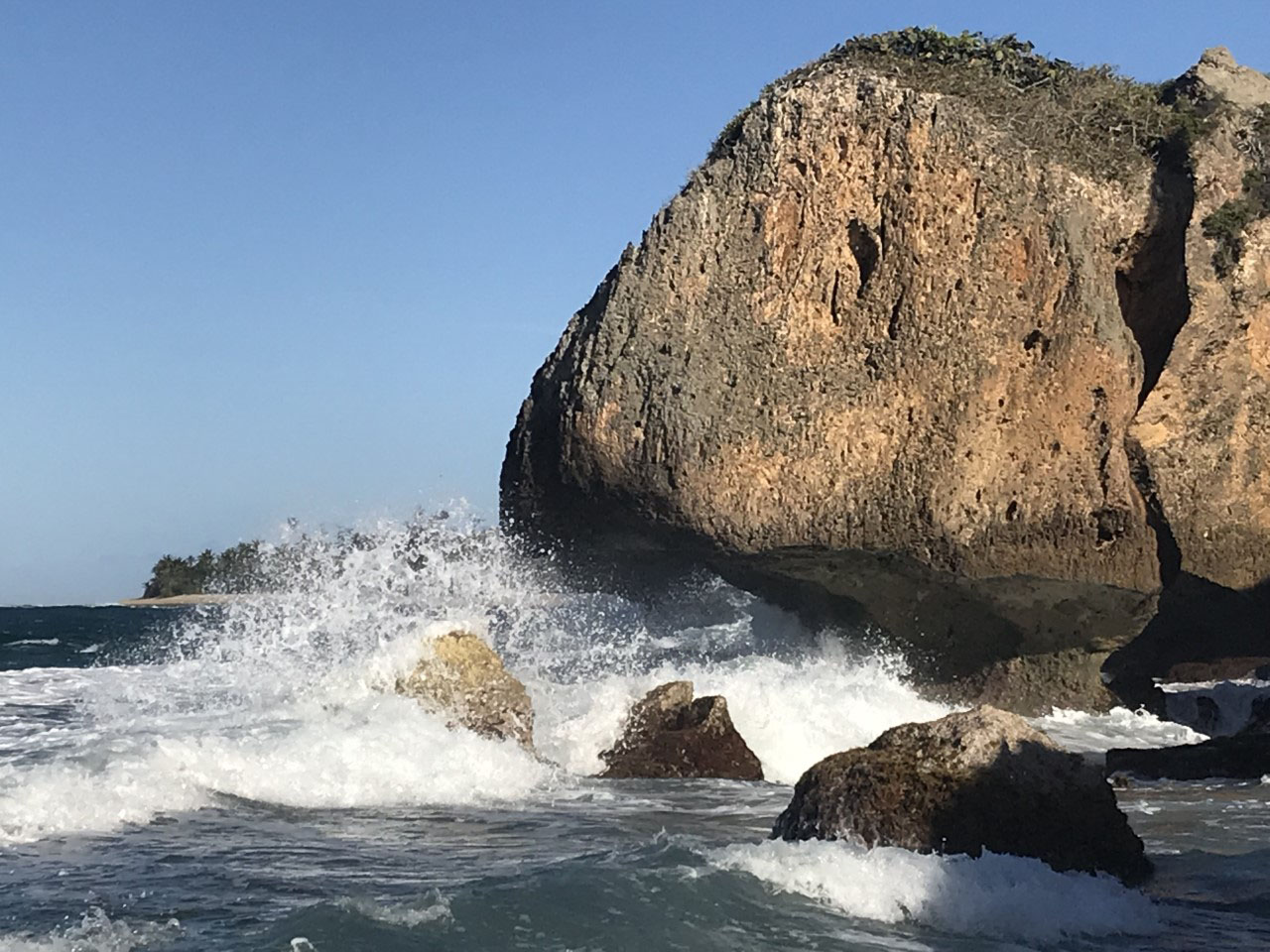 In Aguadilla, we managed to snag the last rental car available, allowing us to explore much more of the island than I had seen before. We rode into Aguadilla proper—the distance between the airport hotel and the city had prevented that trip in the past—then continued down the coast and east to Ponce, another city I had never seen despite my layovers there.

We had planned the route back across the mountains to Aguadilla on a major highway, but an old buddy I used to fly with, who had lived in Puerto Rico for years, insisted we step off the beaten path for at least part of the journey. We were treated to a winding road, mostly paved, that traced the edges of cliffs and ridgelines for several miles. Winding switchbacks had Amy stomping an imaginary right-seat brake pedal when we weren’t distracted by the breathtaking views. We braked for goats, chickens and washed-out segments of the road where we crossed our fingers and hoped it would hold as we crept along the remaining lane.

Back in our hotel room, we called it a night quickly after the sun kissed the horizon. Amy had to catch a different flight off the island than the one I was flying—she was hoping to make it home in time for some holiday leftovers with her family. She launched on a 4:30 a.m. flight, and hours after she left, I was seated in the Denny’s for eggs, bacon and toast. It was almost 6 a.m. on Christmas day, and the restaurant was full of festively decked revelers whose all-night holiday bash had only slightly started to slow down.

The plan was to fly to New York, where the trip ended, and I would be able to step right onto the morning flight to Atlanta. I would have about 14 hours at home, just enough time to refresh my laundry, eat some leftovers and come back to work for the next trip. The loads had shifted at the last minute, and the flights home were oversold. The flights coming back to work the next day looked even worse. I resigned myself to Christmas night at the crash pad and headed downstairs to the crew room for a company-provided holiday meal.

Nobody knows for sure what went wrong. Maybe the accounting department decided a smaller order than past years would suffice, or possibly folks just turned up exceedingly hungry. Some enterprising employee may have creatively catered their own holiday feast. Either way, I got nothing but an apology when I stepped into the breakroom. The serving trays of holiday staples were picked clean; all that remained was a tower of canned sodas.

If we always got a solid hit on the first swing, the game would lose a little of its magic. Besides, Chinese takeout in New York ain’t a bad way to celebrate.